Does the UAW Live or Do We?

Kind of a stark way of putting it, but the UAW is facing life or death.  In the past 30 years, almost every job lost in an auto factory has been in a UAW plant, while almost every job gained has been in a non-union factory.  The UAW's membership is plunging, to the point where operating funds are coming out of savings.  Although Obama gave them GM and Chrysler, screwing other unions, such as the teachers' unions that bought GM bonds for their retirement funds, and screwing other bond holders (not to mention centuries of contract law), the Glorious Peoples' Automotive Collectives are not faring well.  According to a story widely circulated, and covered by NPR, UAW contracts force companies to add about $3000 to the price of a car, to pay for union benefits.  They are simply not competitive in the world marketplace.  Faced with this choice, the UAW is doing what any drowning victim does; they are trying to stay alive by climbing on anyone that's handy.  Or, in this case, throwing anyone under the bus they can.

Columnist John Ransom at Town Hall writes that the UAW has decided on a course of action that borders on economic terrorism, a worldwide boycott.  Ransom equates it to suicide bombing the US economy, which is hanging on by the thinnest of threads.  He links to a Reuters article, which says,


The United Auto Workers union is staking its future on the kind of struggle it hasn't waged since the 1930s: a massive drive to organize hostile factories.

This time, the target is foreign car makers, whose workers have rebuffed the union repeatedly. Specifically, Reuters has learned, the union is going after U.S. plants owned by German manufacturers Volkswagen AG and Daimler AG, seen as easier nuts to crack than the Japanese and South Koreans.

It's a battle the UAW cannot afford to lose. By failing to organize factories run by foreign automakers, the union has been a spectator to the only growth in the U.S. auto industry in the last 30 years. That failure to win new members has compounded a crunch on the UAW's finances, forcing it to sell assets and dip into its strike fund to pay for its activities.


As I reported last March, the UAW’s honcho, (Bob) King, gave foreign automakers including BMW, Volkswagen AG, Toyota and Nissan an offer they can't refuse: Unionize their workers or else he'll single out one automaker and put the screws to them with a boycott. Never mind that the boycott will hurt workers, consumers and the US economy

What UAW is saying is that since they add $3000 per car to the price of anything sold by the unionized shops, they need to raise the price of every car everywhere by that amount, by unionizing the world.  Or as Andy Stern said, "workers of the world unite: it's not just a slogan any more".   There are those who believe one reason for the government's raking of Toyota over a sticking accelerator earlier in the Obama administration was to get the liability costs that Toyota faces to add a few thousand dollars to the price of a car and more level the costs between Toyota and GM.

The UAW faces an uphill battle.  The plants they want to unionize are in the south, a part of the country not known as strong union country.  From the Reuters piece:


On one crucial front, the effort to keep wages at union plants above those at non-union plants, the UAW has already lost a lot of ground.

Newly hired workers earn $14.50 an hour at VW in Chattanooga. That is just below the $14.78 that a new hire would make at a unionized GM plant in Spring Hill, Tennessee. Adjusted for monthly dues at Spring Hill, the VW worker is behind by only about $15 per month.

I like the way Ransom ended his column, so let me conclude with that quote here:


The UAW has pushed the domestic auto industry to the brink of death.

And the only way they can survive is by using the old mob tactic of firebombing a competitor. But that tactic will likely backfire, as consumers, already resentful of union and government interference in the auto industry, simply shrug their shoulders and buy Volkswagens and Daimlers anyway, perhaps not in spite of, but because of the boycott.

Consumers of the world unite. 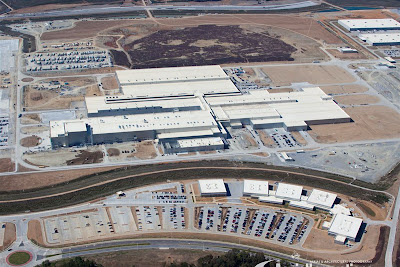