You've probably heard of the Internet Strike over SOPA/PIPA bills currently in the Senate/Congress respectively.  H/T to Bayou Renaissance Man for pointing this out before I started hearing about it on other channels.

SOPA is short for Stop Online Piracy Act while PIPA is the Protect Intellectual Property Act, and together they have the backing of a lot of very well-funded groups.  The big problem is that, as written, you commit a crime by linking to any site that links to another site doing something illegal.  If you have a web page or blog, you could link to someone's page not knowing that somewhere else on their page, they link to someone who has posted something that a third party claims to own, and suddenly you've committed a crime.  You didn't link to the pirated movie or other material, you linked to someone for an unrelated reason, yet you are now a criminal.  A perfect example of the current trend to not use the age-old concept of "mens rea" - it's not a crime unless you know you were doing something wrong.

Killing the practice of hot-linking to each other will kill the web as we know it.

I guess that technically, this means I'm striking for two days, since I'm writing about this today, and going dark tomorrow. 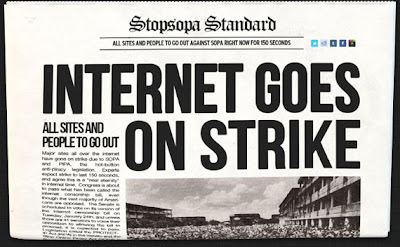 And since you won't be able to read Boing Boing's statement of support while they've gone black, let me quote some of it - it's excellent.  And, chances are, this (most of this) is all we're ever likely to agree on.


This is the part of the post where I'm supposed to say something reasonable like, "Everyone agrees that piracy is wrong, but this is the wrong way to fight it."

But you know what? Screw that.

Even though a substantial portion of my living comes from the entertainment industry, I don't think that any amount of "piracy" justifies this kind of depraved indifference to the consequences of one's actions. Big Content haven't just declared war on Boing Boing and Reddit and the rest of the "fun" Internet: they've declared war on every person who uses the net to publicize police brutality, every oppressed person in the Arab Spring who used the net to organize protests and publicize the blood spilled by their oppressors, every abused kid who used the net to reveal her father as a brutalizer of children, every gay kid who used the net to discover that life is worth living despite the torment she's experiencing, every grassroots political campaigner who uses the net to make her community a better place -- as well as the scientists who collaborate online, the rescue workers who coordinate online, the makers who trade tips online, the people with rare diseases who support each other online, and the independent creators who use the Internet to earn their livings.

The contempt for human rights on display with SOPA and PIPA is more than foolish. Foolishness can be excused. It's more than greed. Greed is only to be expected. It is evil, and it must be fought.

Labels: big freakin' out of control government, Me, the big picture