In this comment to my post on Saturday, and in this comment on Friday commenter RegT posts an honest question about the coming presidential election.  Is there really going to be an election next November?

This question is ordinarily the domain of real conspiracy theorists.  It's high on the list of things I never thought I could end up thinking possible.   But I can easily see possible scenarios that seem likely to end with no election in next fall.  The Occupy Whatever idiots figure prominently in the scenario (all of what I've written is here, I think).  Occupy got plenty of good will from the Evil party - Debbie Wasserman Shultz, party chair-critter, just praised them again the other day.  Even some III patriots seemed to want to be part of it.  You can expect them back when the weather warms a little.


The potential I see is for them to act up so badly that the (bankrupt) cities can't handle the expenses.  Perhaps they assassinate a politician they don't like, or duplicate the Chicago 1968 Democratic Convention's riots.  The (bankrupt) cities beg the (bankrupt) feds for help, and the National Guard is called up.  Martial law is enacted, giving the fascists the chance to surround the white house with tanks and address the (right wing) domestic terrorism problem.  This could make the last presidential election The Last Presidential Election.

Obviously, at no time in our history have elections been suspended.  Not during the civil war, not during the world wars or any other crisis we have faced as a nation.  That's probably the Rubicon beyond which open civil war begins.  Or one branch of the Rubicon. 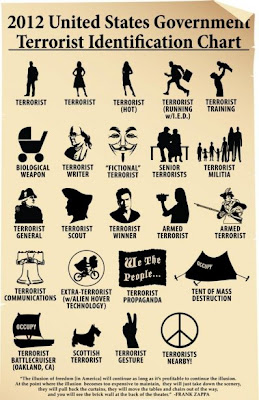 This would have to be in response to a crisis, as it always is - "You never want a serious crisis to go to waste, and what I mean by that is an opportunity to do things that you didn’t think you could do before.", as Rahm Emmanuel said.   Rioting by Occupy idiots, leading to massive crackdowns on potential terrorists (all under the recently passed NDAA), and grabbing power "for the duration of the crisis" could be just such an example.  Normal elections will be restored once the crisis is over.  This is the sort of thing that marks a banana republic - and we are rapidly becoming one.

To quote George Orwell from 1984 (h/t to Donald at Sense of Events in his excellent piece, "The Left's Only Question: Who is to Rule, that is all".)

The idea that a president would surround the White House with the tanks and declare elections ended is difficult to accept."  It's a repugnant thought, but it's spreading:  gathering minds around the country and elsewhere, folks feeling it in their gut and becoming concerned it's going to happen.

Sometime later I can tell you how I think a coup, takeover, and cessation of elections could be arranged by the muscle behind the administration: the New Black Panther Party, the Department of (Social) Justice, the Public Unions and so on.
Posted by SiGraybeard at 9:33 PM