When You Were A Kid, Did You Mow Lawns, or do Chores For Money?

Did you mow lawns?  Trim hedges?  Babysit?  In my day, only girls would babysit and I doubt a family would have hired a boy to babysit.  Those days may be over now.  Author Lenore Skenazy at Reason magazine posts a story about a Washington Mom who posted an ad to help her 9 year old daughter do chores to make a little money.  In turn, she was reported to the police and questioned. The mom in question wrote Ms. Skenazy to tell the story.  Lenore Skenazy is founder of the book and blog Free-Range Kids, and president of the nonprofit Let Grow.


A mother in Woodinville, Washington, posted an advertisement on behalf of her 9-year-old daughter, Sarah, who was willing to do housework—laundry, dishes, etc.—for neighborhood moms who needed help. Six hours later, the cops showed up to make sure Sarah wasn't being abused or worked to death.

That's according to Christina Behar, Sarah's mom, who wrote me a letter about the incident.

"Apparently the ad generated multiple phone calls from paranoid neighbors thinking I was using my child as a slave," wrote Behar.

Woodinville appears to be part of King County and a suburb to Seattle.  Seattle is famously deep sapphire blue, of course,  and that leads me to assume whoever called the police is probably just overly cautious, but incapable of thinking that having a child work might teach them some useful lessons.  I'll let the mom tell the story:


My husband and I have three kids ages 9, 7 and 5.  We have always tried to raise them to be independent and let them play outside for hours in our family-friendly suburban neighborhood outside of Seattle, walk alone to the neighbors, and have taught them how to cook, clean, do laundry and other household chores that we deem age appropriate.  Inspired by your book [Free-Range Kids] I posted an ad on our neighborhood website advertising my daughter as a mother's helper.  Moms often ask me for her help and I figured I would take your advice and reach out to others in my neighborhood I may not know. This was the ad:

Hello! My almost 10-year old is available as a mother's helper.  She is the oldest of three and is quite capable. She can fold and put away laundry, sweep, set tables, clean dishes, take out the trash, make beds, vacuum, make light meals, and keep your kiddo busy. We are a homeschool family so she has a flexible schedule.  Please message me if you are interested in meeting with us.

Six hours later the Sheriff was knocking on our door.  He was embarrassed and apologetic but said he had to do a welfare to check to make sure I wasn't running a sweat shop! Apparently the ad generated multiple phone calls from paranoid neighbors thinking I was using my child as a slave.

The mom notes in another correspondence that the deputy did "leave me with a warning that I should never post anything about my child wanting payment for her services."  Does this violate labor laws now?

There's probably nothing more American than overreaction.  The same mindset that says "if a little is good for you a lot must be better" with regard to any food, vitamin or exercise turns into "since we know there are such things as child slaves and human traffickers then everyone must be a human trafficker handling child slaves".   A common example is that fathers doing anything alone with their daughters, like traveling, instead get questioned to ensure they don't have a kidnapped child they're going to exploit.  Similarly, you probably recall the stories about a mother being charged with a felony for letting her child walk half a mile (that's half a block in many places around here) to the park.  Lenore Skenazy's site is full stories like this.

Working your first jobs that someone actually gives you some money for is big step in a child's life.  It was common where/when I grew up that we didn't get an allowance, we got a list of chores to do and if we did them well we got paid.  Even as little kids, we knew it was different when someone else paid us.  Today, lawn mowing is something that adults do with lawn tractors, edgers and blowers.  50 years ago, it was a way for kids to make some money after school or on the weekend. 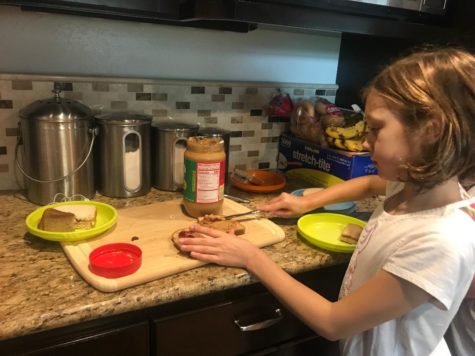 Sarah - the nine year old who would like to make PB&J sandwiches for someone else - for hire.