On the End of a Physical Kilogram Standard

Like many of you, I had come across stories in the last few years saying that Standard Kilogram, long stored in a tightly controlled location in Paris, was going to be replaced by one that can be more precisely defined.  All of the preparation work is done and the switch over to the new standard kg is set for this coming May.  The standard kilogram, formally referred to as the “the International Prototype Kilogram,” or IPK, is the last of the real, physical objects used as a standard in the SI, Systeme Internationale, or International System of Units - what Americans typically call the metric system.  I was puzzled about how mass could be linked to other fundamental quantities used as standards in a practical way.

Let me back up for moment.  Normal people rarely think about this, but how do we know exactly what something like a kilogram weighs?  To what accuracy?  Welcome to the science of metrology: how things are defined and measured.  This could get quite deep and long and is mostly things I'm only dimly aware of, but I also know from conversations with others that it's a realm that most people are completely unaware of.

Back to the kilogram.  Scales that balance two things against each other go back to 2000 BC, so a simple way to measure a kilogram is to compare something else to the standard kilogram.  "Standard" just means everyone agrees that it is the standard.  The International Bureau of Weights and Measures (another French acronym - BIPM) is an intergovernmental organization in which countries work together to define standards and create measurement methods that anyone can use so that their measurements can agree.  That leaves us in a lurch - we need to create a standard kilogram.  The standard used to be defined as the weight of cube of water a tenth of a meter on each side (one liter) at just above freezing.  This relies on two other standards: length and temperature.  The meter was defined as one/ten-millionth of the distance from the equator to the north pole (on the meridian through through Paris, France) and the Celsius temperature scale was defined by the freezing and boiling temperatures of water at standard pressures.  Don't ask me how they calculated that fraction of the distance between the equator and the north pole because the same problem of a standard exists there.

I'm going to skip over a ton of interesting history here, but the important points are how the standards have been redefined over and over and that recent changes have been in an attempt to relate them to fundamental characteristics of nature that can be measured anywhere (with sufficient sophistication).  The standard meter used to be the distance between two scratches on an iron bar kept in Paris.  Later (1875) that was upgraded to a 90% platinum 10% iridium bar.  Similarly, the standard kilogram changed in 1799 from that "liter of water just above freezing" to a (much smaller) platinum bar and then to another  90% platinum 10% iridium bar also kept in Paris.  In principle, someone could make a duplicate of the BIPM standard by placing the standard and their work on opposite ends of a balance and refining the one they're working on until the weight exactly balanced the BIPM standard.  That would then be a secondary standard. 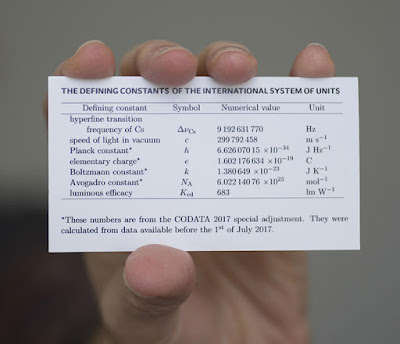 Starting in the 1960s, metrologists began an effort to use fundamental properties anyone could observe.  For example, the meter is now defined as the distance light travels, in a vacuum, in 1/299,792,458 seconds with time measured by a cesium-133 atomic clock which emits pulses of radiation at 9.192631770 GHz (Gigahertz or billions of cycles per second).  Counting this number of pulses tells you one second to very high precision.  The distance light travels during one of those pulses tells you the length of the meter. 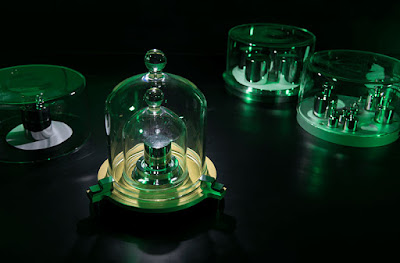 The NIST's (US') standard kilogram, front, under double bell jars.  Behind are stainless secondary standards of various sizes.  NIST photo.

The key to how the kg will now be defined is to use the best known value for Planck's constant, h on that card which relates energy to frequency.  They are changing Planck's constant to be defined rather than measured, which turns the kg into a derived unit from fundamental properties of the universe.


In theory, the seven defining constants [first figure - SiG]  allow anyone, anywhere, to recreate “perfect” calibration and metrology standards without need for comparison to a master. For example, SI has redefined the kilogram using a fixed value for Planck’s constant and the definition of the meter and second, which are already based on constants. Using these, a mass of any magnitude can be realized by equating the electromagnetic force it takes to hold that mass against the force of gravity using a Kibble balance. 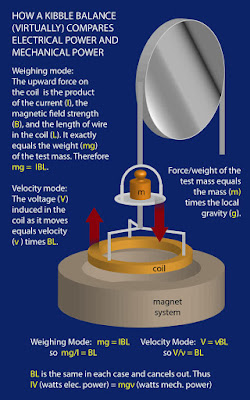 
This instrument uses the fundamental E = mc2 relationship between mass and energy, along with the extremely accurate value for Planck’s constant (which relates a photon’s energy to its frequency). Scientists and engineers can now relax, knowing that they can achieve the extraordinary accuracy they need for mass measurements without checking their “master” kilogram at NIST or at similar measurement institutes at other countries.

The replacement of the master kilogram as an artifact with a reproducible primary standard represents the culmination of a long-sought dream of metrology experts. Now, none of the defining constants and primary standards are tied to a single physical artifact that could be damaged, lost, stolen, or even changed over time for uncontrolled reasons, as the IPK and Earth’s orbit have been doing.

There's an interesting page on the Kibble balance (named for Bryan Kibble at the U.K.’s National Physical Laboratory (NPL)) on the NIST web page, including a good video of how it works.  As you might imagine, at the level of precision they need - the sheer number of decimal places they're aiming for - everything matters and has to be taken into account.