Imagine if We Paid for Food like We Do Healthcare

That's the provocative title of an article on Libertarianism.Org and reprinted by FEE (the Foundation for Economic Education).  The article is by Dr. Ryan Neuhofel, DO, MPH, a board-certified family physician in Lawrence, KS. As he puts it:


Imagine if you purchased food like most Americans obtained healthcare.

No, I really want you to try to envision it…

I am a family physician whose father worked in a grocery store and I enjoy eating at Mexican restaurants immensely, so maybe I can help:

I think most of us have some inkling of how screwed up the health care system is in this country, but Dr. Neuhofel puts together a world in which Food is paid for with a system just that screwed up.  Perhaps it's the "after" state for whose who argue that food is a basic human right.  I can't say I was really surprised by anything, but he did a good job of creating a parallel universe populated with a "Green Cross Green Shield (GCGS) Bronze-Select food plan" and an Affordable Sustenance Act (a.k.a. ASA, or “Obamafood”).  Instead of Costco, BJ's Wholesale Club, Amazon, Walmart and dozens of other companies competing to see who can provide a better price per pound or better quality food to get your business, this parallel universe features giant Food Plan providers and (of course) the Fed.gov totally destroying the market incentive to provide better food at lower prices. 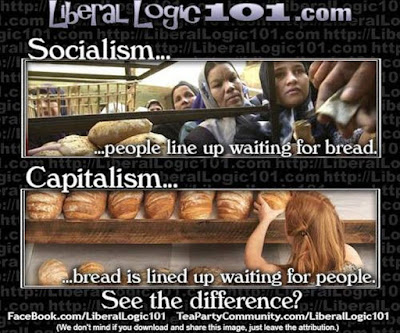 I really recommend you read the whole thing, but as I usually do, I'm going to grab a few excerpts to whet your appetite.


Thankfully, your new Green Cross Green Shield (GCGS) Bronze-Select food plan is a benefit provided by your new employer. There is some payroll deduction stuff that you don’t quite understand yet. Most of the plan’s $680 monthly premium is hidden from you and drastically reduces your wages. Still, you are happy that your food plan costs only (as far as you know) $123 per paycheck.
....
Worried that you won’t be able to afford everything on your list, you cross off any special items and opt only for the basics. As you scurry up and down the aisles, you see there are no prices listed on anything, nor labels telling you what is a Bronze-Select item. You suspect the delicatessen with your favorite cheeses is off limits because of the large “included with United Food Platinum-Plus” sign above it but with no mention of Green Cross Green Shield. Remembering that eggs are included as a “free” GCGS wellness benefit you get 3 dozen of those—even though you don’t really need any right now.
...
During check-out, the cashier rings up the items and asks you for a $30 copay. You are given a 6-page receipt with indecipherable codes and then asked to sign a few other forms because some of your items will be billed to you later.

As you drive home, you remember that your monthly food deductible is $250 and you hope that the balance of the bill isn’t overly expensive. (Several months in the future you get a bill for $276 from FoodMart. Although vaguely suspicious that you’ve been taken advantage of somehow, you are happy that you got a big discount on your $18 box of Tasty Flakes cereal and have now reached your deductible.)
...
Upon checkout, you present the waiter your GCGS card, and you are asked to pay a $10 copay. (The billing statement weeks later reveals that the “plan discount” did reduce the initial charge from $64 to $37 and that GCGS paid Burrito King another $27 a few months later which got applied to your deductible.) You question how a simple burrito can cost $37, but nobody, including the majority of food policy experts, knows exactly why.
...
Politicians, regardless of their ideology and grandstanding, are lobbied heavily by a swamp of power players to preserve the status quo. Understandably, most Americans are fed up with all of this, and an increasing number now believe the only solution is a national, federally-administered “single food plan.”

As always, the thing that boggles my mind is those people arguing for a "single payer food plan" are begging the ones who screwed up the existing system to "do it again, only harder".  Whenever there's some sort of corruption found where some industry lobbies the Feds for giveaways, they pounce on the private sector guys and totally ignore the Fed.gov.  If someone bribes a legislator, they've both committed a crime.