My readers and friends in the Pacific Northwest will probably see this story differently than most.  If you're not in the Pacific Northwest salmon country, and I'm about as far from there as you can get and still be on the North American Continent, you might not realize that transporting salmon around hydroelectric dams is a big problem - and a small industry.  According to one source I read five years ago, the Fed.gov spent over $500 million transporting about 2 million salmon around dams on the Columbia river - or $250 per fish.  I would imagine you could buy them airfare and fly them inland for not much less.  (Imagine if you will an airport waiting area populated by ticket-holding salmon who are reading newspapers, fiddling with their smartphones and semi-patiently waiting for their plane to leave).

One of the design problems in the PNW is damming the rivers that flow into the Pacific to get better resources for the people living there, while accommodating the salmon and other fish that swim upstream to spawn as well as their tiny offspring that go back down the river to the ocean later in the year.  How do engineers design systems to accommodate the fish as well as the human concerns?

The first questions I'd ask is about the limits of the design: are we designing for minimum pressure change, or turbulence or just what?  What are the values for those things now, and how much better do we need to make them?  How much can the fish stand versus what do we subject them to?

Enter the Synthetic Fish (which could be a good name for a band): 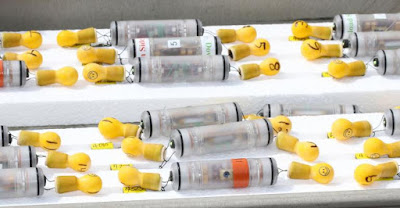 The synthetic fish, clearly not a simulated fish (doesn't look particularly salmonoid to you, does it?) is a product of Advanced Telemetry Systems, and the Dept of Energy’s Pacific Northwest National Laboratory (PNNL).  They are built around the Shish Sensor, developed at PNNL to monitor and transmit what happens to fish as they pass through turbulent waters and turbines at hydroelectric facilities. The Sensor Fish is a small autonomous device filled with sensors that analyze the physical stressors fish experience when passing through or around dams.


The sensors provide researchers with accurate physical measurements such as acceleration, pressure, rotational velocity, and orientation, all of which convey what real fish experience during downstream passages. Each sensor provides roughly 2,000 measurements per second and typically takes less than two minutes to pass through the dam due to the water’s velocity.
...
Once the Sensor Fish comes out on the other side of the dam, an automatic retrieval feature brings it to the surface. Radio signals and flashing LEDs on the Sensor Fish enable them to be collected quickly from boats stationed nearby.

This seems like a good way to measure the environment to see what the fish are exposed to, but I don't know of a way to figure out what they can stand without either finding systems they survive and saying "it's more than that" or systems that kill the fish and saying "it's less than that" - which I think is how we got the designs we have.  The alternative is going to be subjecting a population of fish to a lot of tests that will kill some of them.

They say that there's a lot of stations the fish go through and they generally do pretty well, but there's always room for improvement.


“There is a big need for the type of data provided by the Sensor Fish,” says ATS president Peter Kuechle. “Mature hydropower industries in the U.S. and Europe hope to modify operations to help fish survive. In Europe, regulations insist on testing for this information, and certainly there’s a need for the data in emerging hydropower projects globally.”

But you can never have too much data.  After all, the Sensor Fish looks to be a few inches long.  What about smaller fish?


ATS has also licensed two other fish technologies developed at PNNL. The Juvenile Salmon Acoustic Telemetry System (JSATS) and its advanced decoder software can track fish passing through dams and beyond and monitor fish behavior. PNNL developed the JSATS transmitters and battery to be so small it can be injected into young fish. This eliminates the need to surgically implant a tag, which puts extra stress on a fish. JSATS includes the smallest acoustic transmitters in the world.

PNNL has also recently developed an even smaller tag that can be used on the tiniest fish, including juvenile eel and lamprey. “This new acoustic fish tag meets the Army Corps of Engineers’ JSATS specifications and weighs less than 0.01 oz.,” says Kuechle. “JSATS is complementary to our long history of developing innovative and cost-effective wildlife tracking products.” PNNL is now working to develop a self-powered tag for long-term monitoring.

I still can't help but think that if you really want to find out what the limits are someone's going to put the salmon fry into a virtual Cuisinart and see how much they can take.  Salmon milk shakes anyone?