A little while ago, I wrote that raising the minimum wage to the (often talked about) $15/ hour level would almost certainly wreak havoc on our economy.  There are many, many jobs at pay levels between the current minimum wage and $15, but all of them will have to be compressed into $15/hr.  Consider someone making $13/hr now; perhaps they've worked long and hard to get to that level, or took some classes in a new job field or otherwise busted hump to get there.  Suddenly, a swipe of the pen, and they make the same as someone with no experience and no skills.  A bit of social outrage, perhaps?

Political Calculations shows just one of the effects of minimum wage increases in the last 10 years; a sharp drop in employment of 18-19 and 16-17 year olds.  How much more job loss would a $15 wage create? 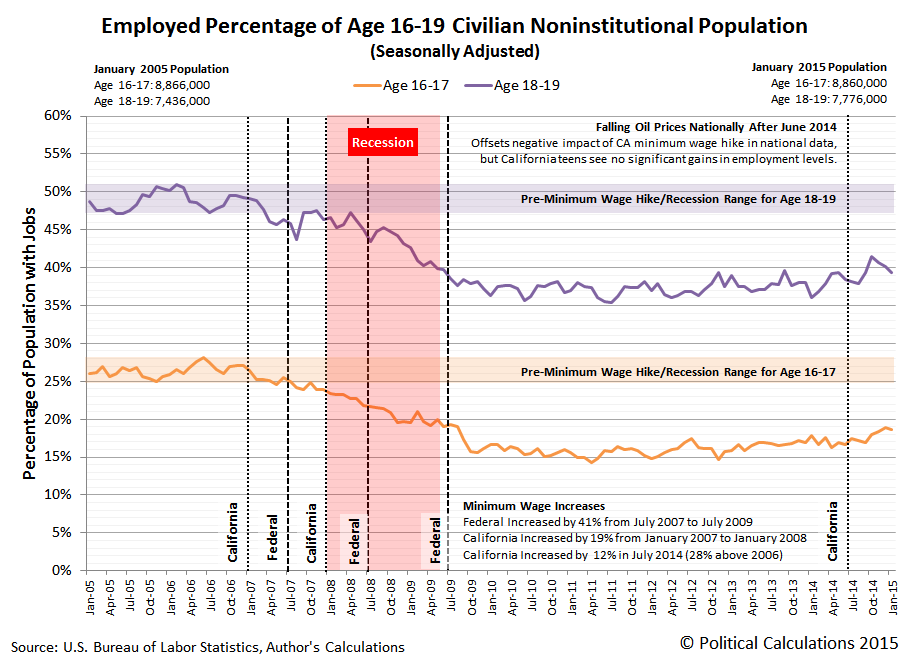 The not-so-hidden complication to this chart is that people who were 16-17 at one year move into the 18-19 group in a couple of years and 18-19 year olds move into a completely different group over the same interval.  Political Calculations gets all into the demographics on that.

As we see in the chart, the practical effect of all the minimum wage hikes that occurred from 2007 through 2009 was to remove the jobs available for this portion of the U.S. civilian noninstitutionalized labor force.

You might have noticed a little uptick of the employment rates over the last six months.  This is probably an effect of the drop in oil prices, which had the some of the same effects on the economy as a tax break.   It's really the only factor to offset the negative impact of the minimum wage hike in California just last summer: July 2014. We should note however that unlike teens elsewhere in the U.S., California teens have seen no significant gains in employment.

This is what fundamental transformation and social justice look like.  More unemployment and more misery for everyone, but especially those demographics they say they're trying to help.