From an email today, I see that Baltic Dry Index is setting up for a record low,


And the collapse just keeps going… since Thanksgiving, The Baltic Dry has fallen on 43 of the 47 days, down over 60% from the “China growth is back and all-is-well” hope-filled days of late October (when Jim Cramer “stressed the importance of watching the Baltic Dry Freight Index,” as his bullish thesis confirmation). At 569, The Baltic Dry is inching ever closer to what will be the lowest level ever (554 on 7/31/1986) for the global shipping cost indicator…

The Baltic Dry is an index I try to look at now and then.  It's used by many as a "leading indicator"; an indicator of things to come.  It measures the amount of ocean-going freighters being booked to move freight around the world,


What makes this particular measurement so distinct from others, according to economist Howard Simmons, is that the BDI “is totally devoid of speculative content” because “people don’t book freighters unless they have cargo to move.” 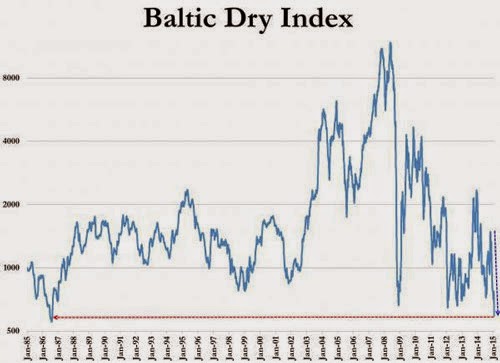 Taking a look at the BDI chart's last few months in more detail, that doesn't appear to be a gentle decline.  With exceptions for a couple of weeks in December and then in January, it's been dropping  since the first of November.  I'm not quite sure how the impending West coast longshoreman's strike is going to affect this, but I can't see how it helps.

I'll add this to the end of my post from two weeks ago on some of the signs of the approaching Really Bad Times I see.  As a guest contributor to ZeroHedge put it


The Big Crisis, the one in which entire countries go bust, has begun. It will not unfold in a matter of weeks; these sorts of things take months to complete. But it has begun.