As always, when politicians talk about something with a catchy name, you can bet the reality will have nothing to do with the name.  Anything patriotic about the PATRIOT Act?  Has your medical care gotten more affordable since the Affordable Care Act?  If we sat around we'd come up with dozens of more examples.  That should be your first thought when you hear the term "Net Neutrality".  In reality, it's best to think of it as the Federal Department of the Internet.

I don't know about you, but in my life the thing I use and interact with that gives me the least problems is the Internet.  I'm not talking about individual companies on the 'net, be it Blogger, forums, or any e-tailer; I'm talking about the ability of the net to route packets where they need to go absolutely routinely.  But even there, every web site I need is up and running way, way more often than not, including volunteer-supported sites.  And the worst web site in modern memory, the Obamacare Signup site, was run by the same people who want to take over control of everything.  It's the least broken aspect of society precisely because the Fed.gov has kept its hands off it.

Government is going to screw it up like they screw up everything else and we all know it.  Honestly, given these choices, which do you prefer?  Which do you think the majority of people would choose?  Be honest:

Stu Burguiere, Glenn Beck's co-host and someone I always thought was the "brains of the outfit", put together this pretty good set of arguments against net neutrality,  pointing out some of the most common arguments and where they fall apart.

FCC Commissioner Ajit Pai (one of the two minority party Republicans on the Commission) has come out publicly against the proposal, and did an interview with Sean Hannity, audio (self-starting) here.


Earlier, after criticizing the plan’s secrecy Pai stated “the details of the plan itself are very intrusive, it’s a massive shift in favor of government control of the Internet. Everything from your wireless service plan, to your wire line connection at home. And I think ultimately it’s going to lead to higher prices, slower speeds for consumers on broadband services, it’s going to be government rate regulation and second-guessing of the private sector, and it’s going to be a bonanza for trial lawyers. We specifically invite all the trial lawyers to sue, class-actions across the country for any and all Internet practices.”

Again, you have to admire the way the left controls the message.  Ask any ill-informed person (low information voter) and they'll reflexively say the idea is wonderful because the providers are screwing us and want to slow all our net feeds down because they're evil.  Not a thought that the market brought them the continuously improving and faster computers, tablets and everything else, and that the same market is also continuously trying to build out faster and faster internet infrastructure, and that regulation could grind that to a halt.  No recognition of that at all. 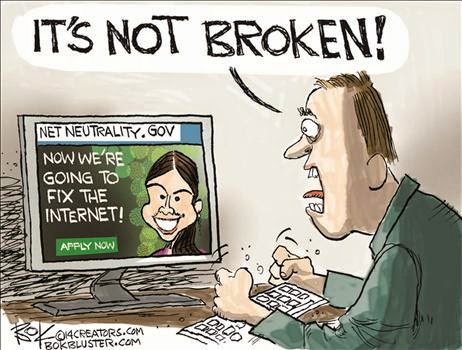