Going over a few charts the last few days, it's looking to me like gold, silver and oil have bottomed and are done with their down trends.  For the foreseeable future.

Oil is simple: an almost constant, smooth decline in price until last month, followed by a V shaped bottom coming out of the minimum.  Since about Jan. 26, it's been higher highs and lows. 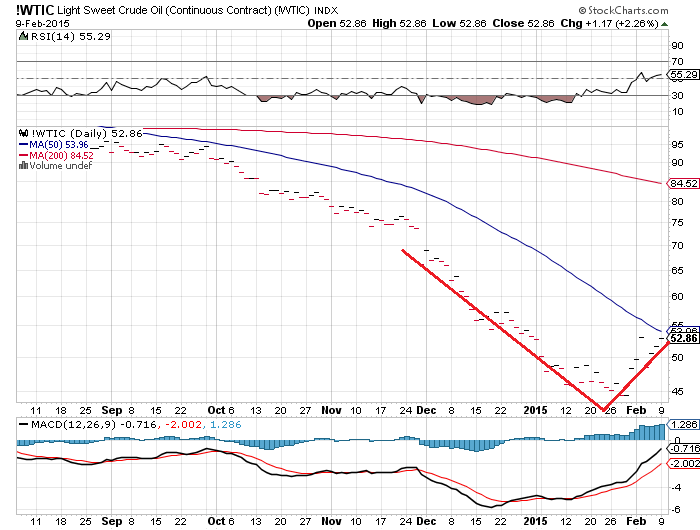 Light sweet crude from StockCharts; the dark red lines are mine.  Around here, regular gas went from $2.03 to $2.17 between the Saturday, Jan. 31 and Saturday, Feb. 7.  I have no reason to think gas will go that low again for quite a while.

Gold also looks like it has hit a bottom and started to recover.

I could draw the upper bounds differently, but the important thing to notice is that since early November, the trend has been higher highs, with a healthy amount of retracing, to test those.  We could be coming to a flag pattern in the next few weeks.  This one bears watching.

Silver is the most difficult of these, but, again, since about the same time in early November, the white metal has been recovering.  The channel it's riding in is pretty consistent.  Both silver and gold showed a dip on June 3rd of last year.  Silver's bounce back was more dramatic than gold's and it was harder to draw an upper boundary.

In all these cases if you wanted to buy on the bottom, you missed it.

Let me give a little perspective on all of these things.  The earliest prices I can recall for a gallon of gas were around 20 cents a gallon: "19 and 9" because Florida prices always ended in that 9/10 of a cent.  Today's silver price of $17.05 says one of today's greenbacks is worth about 8.11 cents of 1964 silver.  In other words, one of today's dollars isn't worth a 1964 dime.  Today's gas price of about $2.15/gallon would cost 17 1/2 cents back in 1964.  Maybe the prices I remember weren't from 1964; but gas is basically the same price it was in 1964, measured against a standard.  Higher gas prices aren't from "peak oil", they're from worthless dollars.