Techy Tuesday - DRM: When Protecting Your Assets Hurts Them

Most of you are familiar with the Keurig coffee makers.  Keurig introduced a convenient, easy (if not "brain dead") system for making coffee: single serving portions of coffee in plastic cups which drop into a coffee maker that does everything else for you.  It made making a cup of coffee and cleaning up after it easy for many folks.  The tire shop I go to has one for people waiting, and I'm sure it's cleaner and easier for them than running a drip coffee maker.

The knock on Keurig, though, was that those little packages of coffee, the K-cups, were expensive.  More than most people thought reasonable.  Plus coffee is more than a drink to many; it's a personal luxury, a personal diversion; part of their rituals.  Maybe there was no Keurig mix that tasted exactly the way people wanted it to.  This prompted a parallel industry creating second sources for way to get coffee into your machine.

I can imagine people in some meeting room at Keurig, sitting around a conference room table, going over numbers on how other companies were cutting into their revenue streams.  This is where Keurig screwed the pooch (to borrow the aviation phrase).  They decided to make sure no one else could put products in their machines.  They released the Keurig 2.0, which incorporated Digital Rights Management into the coffee making process.  Unless your K-cup was Genuine Keurig (it seems like the phrase has to be capitalized that way), your coffee maker won't recognize it.  Buyers were not happy.  Amazon reviews went thoroughly negative: more one star reviews than fours and fives combined.


And it’s not just the Amazon reviews that are taking a hit — Keurig reported a 12% decrease in brewer sales last quarter. And while the vast majority of their profit comes from the cups, and not the brewers, a 12% hit is a big one. Keurig says that getting 2.0-compatible cups onto store shelves faster would’ve helped, but the consumer reaction is clear: “we hate DRM.”

From Keurig's viewpoint, though, this where they screwed the pooch a second time.  They took a bad idea and implemented it poorly making themselves look like idiots.  Tech bloggers MakeUseOf pick up the story with a good summary:


If you’re familiar with the story of the Keurig DRM, you’ll know that a workaround was found very quickly. Not only is it incredibly easy, but it also makes the DRM guys at Keurig look pretty stupid. All you have to do is tape a used K-cup cover over the sensor so it reads the 2.0-compatible code no matter which cup is in the brewer. Which means you can use the Keurig 2.0 with any cup you want, as long as you’ve used one 2.0 cup and saved the lid.

While this video shows a simple fix, there are more.  Many more.  Lots of folks are all over this. 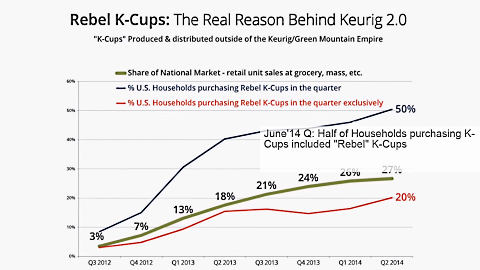 MakeUseOf is a tech blog and has more to say about DRM in general, so go there if you find that the most interesting aspect.


Of course, Keurig isn’t the first company to anger its customers with DRM. Amazon’s Kindle books have been the target of a lot of vitriol over the past few years, and people have gotten really good at removing the DRM from Kindle books. Still, if you aren’t aware that it’s an option, you’ll likely be stuck with Kindle DRM. Printer companies have been doing it for a long time, too — they make a ton of money when you buy their ink, so they make it hard to refill cartridges and try to keep third-party ink producers from making compatible cartridges (with some success).
...
Kindle DRM, though pervasive, is a bit of a joke. The DRM originally used for Blu-Ray discs was cracked quickly. A number of people claim to have broken iTunes and Netflix rights management. And Keurig’s DRM has been countered with a single piece of tape.

The thing is, most people think that when they buy something, it's theirs.  For example, when TIVO first started selling their recorders, I remember running into articles where people said they wanted to upgrade the hard drive and TIVO wanted way more than the local computer shop; when they bought the cheaper drive and went to install them, TIVO said they were breaking their end user agreement and dropped their service.  People thought when they shelled out a few $hundred for the TIVO, it was theirs, not TIVO's.  Similarly, when folks buy a coffee maker and then buy an accessory for it, they  expect it to keep working.  When the company says, "no, you can't", people don't like to hear that and will try to find ways around it.

We've done a couple of long discussions about patents here, and while I believe that intellectual property exists and inventors should be allowed to protect their invention for a while, I also pretty firmly believe that companies can be pretty stupid in how they conduct business.  In an attempt to recoup sales they thought they were losing, Keurig pissed off and alienated customers.   That's never a good business practice.

(Obligatory coffee snob statement: I wouldn't have a Keurig.  Everything I've tasted out of one was swill.  I have a Mr. Coffee drip maker in my office.  I regularly have newcomers to the building stop by my office to inquire what the wonderful smell is.)