Techy Tuesday - The One Thing From CES You'll End Up Owning

I wrote a little about the CES 2015 (Consumer Electronics Show) three weeks ago, but hadn't read in all the hype about the innovation that I think is going to end up everywhere within a few years.  When you look at all the personal devices, home medical electronics, drones, Ultra HD television and all the rest, I don't think any will penetrate the market as well as the new USB Type C will.  The USB Implementers Forum (USB-IF) demonstrated USB Type-C at CES 2015, and industry leaders are expected to start launching USB Type-C-enabled products within a few months.  My bet is that this new USB incarnation will take off more rapidly than anything else at the show.

USB, the Universal Serial Bus, has been with us since the late 1990s.  While the specifications were complete by 1994, it didn't start showing up in earnest until about 1996, and I think my own first USB devices were added after that when Windows 95 started supporting it.  That means if you're about 21 or younger, you may have never seen an RS-232C port, or more importantly, had to go through the hassles of configuring one.  Likewise you've never had to go through the agony of setting switches, juggling interrupt numbers and assigning port numbers to get something as simple as a phone line modem to work.  (Go ask your parents).

The one constant in the development of computers is the ever increasing "need for speed".   The original USB 1.0 ran at up to 1.5 Mbps in Low Speed mode and 12 Mbps at Full Speed.  USB 2.0 in 2001 implemented a higher data transfer rate of 480 Mbps (High Speed),  a full 40x faster than the Full Speed maximum bandwidth offered by the original USB 1.0.   USB 3.0 followed by November of 2008, and added SuperSpeed mode of 5 Gbps.  In July 2013, the USB 3.1 specification was released and doubled the maximum bandwidth to 10 Gbps, almost 7,000x faster than USB 1.0 Low Speed. This new transfer mode is officially referred to as "SuperSpeed USB 10 Gbps" or "SuperSpeed+" for short.  I would hazard a guess that the majority of computer systems in use today have USB 2 connections.

I've always thought the standard flat rectangle USB connector we use the most, the "A" connector, is the worst connector in the world.  The running joke in industry is that you always have to try it  3 times to plug it in successfully.  The other end has a few different sizes.  The A size shrank as speeds went up, but the B ends were small because makers of small things like digital cameras wanted their end smaller. 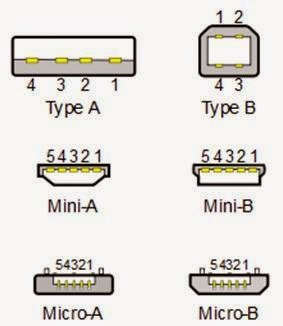 With all that history out of the way, let's meet USB C.  To begin with, the connector gets much easier.  It's a 24-pin connector, which is both small (3mm high and 8mm wide) and robust (it's rated for 10,000 mate/de-mate cycles), but the best part of it from the user standpoint is that the connector can be plugged in either way, like Apple's Lightning connector.  No more fumbling with turning the connector over a few times.  The connecter is small enough that the same connector can be used everywhere -- on workstations, tablet computers, MP3 players, smartphones, digital cameras, etc., and both ends will have the same connector, allowing the devices to negotiate which end is doing what. 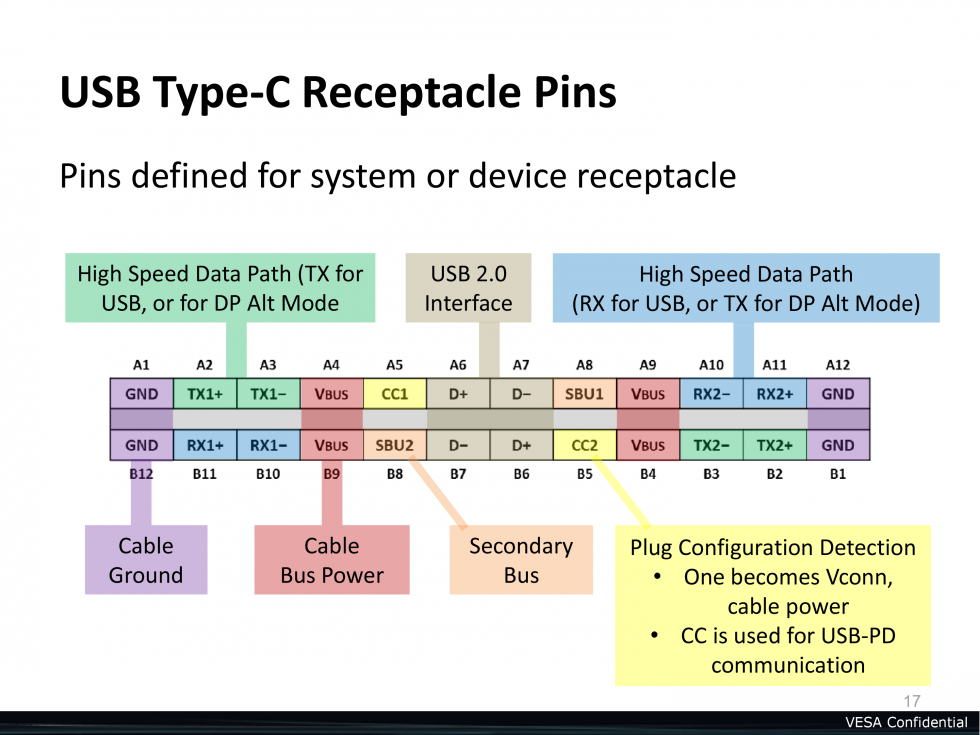 Notice in the pin-out diagram (source) there are two sets of high-speed TX/RX signals. Each of these is capable of supporting the USB 3.1 SuperSpeed+ standard of 10 Gbps, which means USB Type-C can support up to 20 Gbps of raw data.  Furthermore, these signals can be configured to support alternative modes and convey various flavors of non-USB data, such as video.

This is a challenging specification.  Data streams at 20Gbps are really microwave signals and this cable will probably be several micro-diameter coaxial cables, the same concept as the cable TV or satellite dish TV cables.  It is absolutely not trivial to do the things they're proposing and having it embedded in cheap consumer electronics within a year is frankly mind-blowing.