The same thing over and over and over again.  Obama "won't accept" a budget that doesn't increase spending and doesn't penalize the people who pay taxes. 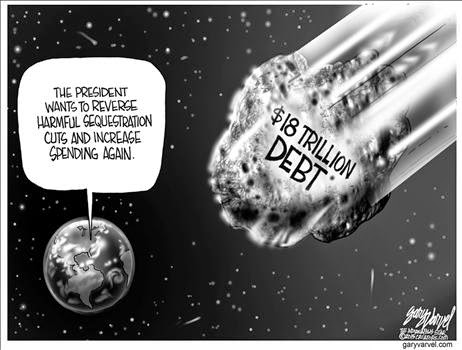 He proposes a $4 trillion budget for one year, proposes taxes that raise $1.5 trillion over the next 10 years and thinks this is not only a good thing, but will "not accept" anything that doesn't do what he wants.  If you're a new reader, let me say I'm always extremely skeptical of numbers stated like that.  There's simply no way to know what "$1.5 Trillion over 10 years" really means.  How much per year?  How much economic growth is expected?  It's virtually guaranteed to be a static estimate, meaning it will be wrong as soon as the people being taxed change their behavior even slightly to avoid the taxes.  Probably as soon as the bill passes.  As for expecting to know precisely how much money goes to the treasury in 10 years, just go look up the 2004 budgets and tell me how accurately they predicted last year.

If he can't see how his own policies are hurting the groups he says he's trying to help, he's hopelessly deluded.   What else can you expect from Alinsky-ite community dis-organizer?