I had been putting together ideas for a post on making metal parts from 3D printed plastic versions for a few days, and see Come and Make It ran a piece on the same idea today, linking to a 34 minute video on the subject.   I suppose it's one of those "convergence of thought" things, where more than one person comes up with an idea at the same time.

While I don't have experience with casting aluminum or steel, I do have a fair amount of experience with lost wax casting metals.  Lost wax casting, also called investment casting, is one of the standard ways of mass producing metal parts, and it's used for an incredibly wide range of products from dental appliances through literally tons of jewelry every year (anything that isn't hand made), delicate metal parts of all kinds, as well as large objects.  A lot of bronze sculptures are made this way.

The name "lost wax" comes from the basic way the system works.  You create a model in wax of the item you want, pour a liquid plaster-like mixture called investment over it and let it harden.  This can be done in a metal flask or directly, as in this video.  This mixture looks like plaster of Paris, but is a specially designed for casting.  The hardened investment is then put into a kiln, where it's heated to a high enough temperature to turn the investment into a ceramic, and in the process, the wax melts and burns out of the ceramic creating a negative mold of the original model.  The disappearance of the wax in that stage is where the name comes from.  The mold is then generally reduced in temperature for casting the particular metal or alloy, and held there.  The metal to be cast is heated until it's hot enough to flow like water, the mold removed from the kiln, and the metal is cast.  Getting metal into the fine details of a small part requires either a centrifugal sling or a vacuum casting, but bigger parts tend to just be made by pouring the metal into the mold.

The main point here is that lost wax casting doesn't have to use wax models as the starting point.  Jewelers sometimes use "organics" as their models, typically a bug.  They often stink while they're burning out, but lots of folks do it.  I think that a plastic model out of a 3D printer could be used directly, if the plastic burns cleanly and not leave a lot of residue.  That's not the only way, though;  a 3D printed object could be used as a master to make a mold by pouring a silicone mold making gel over it.  Once the silicone hardens, it's cut away from the model and then used as a mold for hot wax. 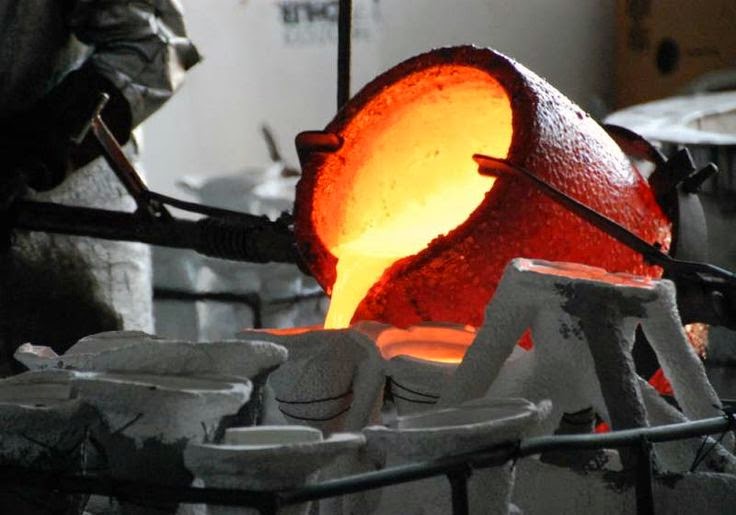 Pouring large objects in lost wax molds.  Never lose sight of the fact that the properties you get out of the metal you cast this way are set by the way you heat treat the metal after the pour.

Even if you have a printer that doesn't print metal parts, with some additional time and effort you can make metal parts from the plastic ones your printer makes.  There are hours of video, acres of text and hundreds of pounds of books written on the process of lost wax casting.  I hope this serves to whet your appetite for learning more about it.