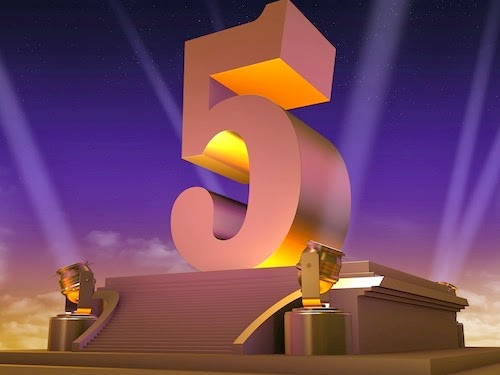 Today is my fifth year blogiversary.  Last year, I said four years old must be 100 in blog years, and I was going to say that five must be something like 75, so one of those can't be right.  I don't know what the conversion to blog years is, but it's a lot.  This week on the local talk radio, I heard the host and his editorial-columnist guest commenting that everything in life is show prep.  Everything that happens to you or that you see becomes fodder for the gaping hole of the content you must always fill in.  While they get paid and I obviously don't, and their content is therefore that much more important, I understand.

Blogger tells me this is my 1677th post and I've had 1,232,519 page views.  On average day, around 1100 of you stop by to see what I'm up to.  Thank you!!  You can tell by that widget in the lower right column that my most read post was an almost-nothing post about Russia drilling for oil off the Florida Keys, and it's most read because it got picked up by Reddit for the picture of the skittles-pooping unicorn that I lifted from someone else and used in other places.  For perspective, that post has had 7778 views, but my most viewed post of all time was the series on making an AR from an 80% lower.  That page has gotten 12888 views, 65% more and over twice as many views as my "real" most popular post, second on that list, about the size of the economic problem we face.  Seems folks must like the idea of making ARs with no FFL involved.  Imagine that!

I never thought of myself as a writer, and I don't really care about writing fiction like Peter, Old NFO, Marko, and some others do.  I don't care about writing fiction because I don't really read much of it.  If anything, I think of myself more as mentor/teacher; the old guy you can always go to for advice, or ask any question of.  Still, if you're a writer, somehow the words force themselves out.  It seems that must be what's going on.

As I've said before my overall approach to this blog reflects the deep truth I've written about many times: really, really bad times are coming.  Survival is for cockroaches; let's thrive.  Someone has to know how to make things.  My goal is to post something worth your time to read, even if it isn't epic.  I'd be lyin' like a rug if I didn't acknowledge that sometimes I'm too pressed for time and just have a hard time getting an idea together in the few minutes I have on work nights.  I promise to "phone it in" less and try harder to either post something worthwhile or not waste your time.

Speaking of making things, I have a guitar neck and body to stain, and a rod that needs to be made.  While they aren't really important after the crash, they both might help you survive; one by helping your sanity and the other by putting a little protein on the table.

Posted by SiGraybeard at 1:12 PM