Time to Put On Some Popcorn

And watch the fight that's starting to break out.   It seems the Hacktivist group that calls itself Anonymous has decided to attack ISIS and cut off their net usage.  (H/T Doug Ross@ Journal) At first thought, that makes sense.  Anonymous appears to be an anarchistic group dedicated to complete open freedom on the net while ISIS is only slightly more oppressive than Kim Jong Un.  Submit to them totally and be 100% compliant with their vision of Islam or die.  ISIS depends heavily on social media and their slickly produced execution videos (snuff pr0n films for Jihadi wannabes).  Cut ISIS off from those things and maybe they whither?  At the least, it can't hurt.


In a series of posts on the website Pastebin over the weekend, purported members of Anonymous vow to continue “Operation Ice ISIS,” taking down websites and social media accounts of groups who assist in terrorist activities.

This new round of online attacks is meant to target individuals who are directly involved with planning and recruiting for attacks against civilians in Iraq and Syria.

“We will hunt you, take down your sites, accounts, emails, and expose you,” said the group in a YouTube video released over the weekend. “From now on, no safe place for you online…you will be treated like a virus, and we are the cure.” The post goes on to list hundreds of links to social media accounts in Arabic, classifying them by their “priority” status.

You're the virus and I'm the cure?  Didn't Ahnold say that in one of his movies?  Big talk.  Still, Watchdog.org says they've made at least a cursory glance at the list and find that most, if not all, the Twitter and Facebook accounts mentioned by Anonymous have indeed been suspended.  Watchdog continues:


And by attacking the Islamic terror group at its central nervous system, that of social media, Anonymous has dealt a more devastating blow to ISIS than the 21 countries currently spending millions of dollars dropping bombs and stationing troops in parts of Iraq and Syria could ever hope to do. Where the military strategists are lacking, the computer hackivists are gaining ground.

Personally, I think ISIS needs to be destroyed and this won't do that ... but it's a good start.  Especially if they could really get their hands on Jihadi John, a man with an obvious and severe plumbous deficiency, like they depict in their Twitter post.   The whole organization is suffering from that deficiency, though. 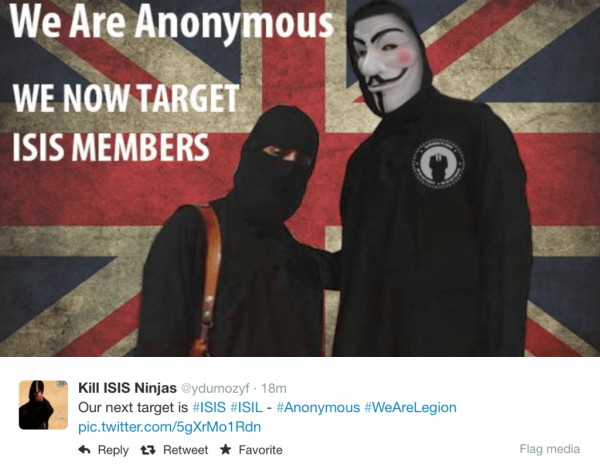 I think this would make an entertaining thing to watch, if we actually could.