The Best Laid Plans of Mice and Men...

This was not a weekend that went as planned or anticipated.

It has been a mild winter here, in terms of average temperatures and "climatological data".  While we enjoyed a cooler January than in recent years, the temperature never got into the mid-30s and there was never a threat of frost.  Average low temperatures were in the mid-40s, which is below average (around 50, depending on the date), but nowhere near records.  I really don't recall it even getting into the upper 30s this year.  February was warmer, with most of the month above average in lows and highs.

That means that the pollen producers had no reason to hold back, and everything is coated with pollen.  On our cars, we get a coarse, sticky, yellow-tinged coat; I've long been told it's mostly pine but I honestly don't care.  I just know it means it's past time to wash the cars.  The nature of the mess is that a drive through car wash won't remove it.  It needs to be scrubbed with something like these.

Due to our size differences, Mrs. Graybeard and I have an arrangement in life.  I clean the roofs, hoods and other high surfaces while she gets the lower parts of the quarter panels, wheels and the lower panels.  I'll do the first arm length down from the hood or trunk, leaving the lower stuff for her.

At one point, Mrs. Graybeard was pulling the hose around her car to get the wheels on the other side and she tripped on the hose.  As Murphy demands, she missed landing on the grass and fell onto our concrete (paver) walkway narrowly missing whacking her head on the rocks that trim the front planted area.  She landed hard on her left hip.  Here's where I need to point out that both of her hips have been replaced, the first one when she was about 50.  She couldn't get up due to excruciating pain.  We tried waiting for a few minutes, and everything I could think of that might help.  She could get upright and stand on her knees, but couldn't stand up any farther.  It took about 15 minutes for her to say, "we'd better call 911".  The paramedics were here quickly and took her to the big hospital ER in town; I straightened up a bit and drove down to sit with her.

The big fear was that the implant was damaged and that can mean emergency surgery.  Thankfully, she didn't damage the implant, but she did break part of her thigh bone (two pieces off the greater trochanter for you medical folks who visit).  The ER doctor said as far as his expertise goes, it doesn't need surgical repair, but it's going to hurt like hell for at least a few days and she should see a specialist.  They sent her home with a prescription for pain meds - ironic in view of my last post - along with a referral to see an orthopedic surgeon.  To both of our surprises, I found her old walker in the garage from when she had one of the hip replacements.  That's helping her get around quite a bit.  She will be very inactive the next few days, and I'll be doing all the cooking, cleaning and such.

That's why it was "radio silence" yesterday.

But that was then and this is now.

Over the last few days, one of my favorite reads, Aesop at Raconteur Report has been running some exchanges (this, for example) with some women in the aftermath of the court ruling that a military draft that took only men was unconstitutional.  With very few exceptions, or so it seems, people who have been on the front lines in the military are against this idea.

In that light, I want to point out something that hasn't seemed to get much coverage.  Congress critter Ilhan Omar (D - Minnesotastan) has asked the Minnesotastan Attorney General, Keith Ellison (D - Domestic Abuse)  to investigate USA Powerlifting for barring biological males from women’s events, according to a Jan. 31 letter she sent USA Powerlifting.

USA Powerlifting has said that men who are transitioning genders may not compete as women because of the obvious advantage being male has.


“Men naturally have a larger bone structure, higher bone density, stronger connective tissue and higher muscle density than women,” the weightlifting association notes in an online explainer. “These traits, even with reduced levels of testosterone do not go away. While [male-to-female athletes] may be weaker and less muscle than they once were, the biological benefits given them at birth still remain over that of a female.”

Rep. Omar told USA Powerlifting that the advantages they document are a myth:


“I urge you to reconsider this discriminatory, unscientific policy and follow the example of the International Olympic Committee. The myth that trans women have a ‘direct competitive advantage’ is not supported by medical science, and it continues to stoke fear and violence against one of the most at-risk communities in the world,” wrote the congresswoman.

The same thing is going on in other sports, as I'm sure you've heard.  Unlike what Rep. Omar says, in sports like various Track disciplines or Cycling, for example, there are long standing Men's and Women's records.  They are often kept by age, or weight class for each sex.   Without exception, Men's records are faster than women's.

A few months ago, a biological male who identifies as a transgender woman won a women’s world championship cycling event.

Rachel McKinnon, a professor of Philosophy at Charleston College, won the women’s sprint 35-39 age bracket at the 2018 UCI Masters Track Cycling World Championships in Los Angeles.   Allow me to post a picture of the podium from Cycling Weekly.  I think it's an instructive game of "one of these things is not like the others" that a small child could spot. 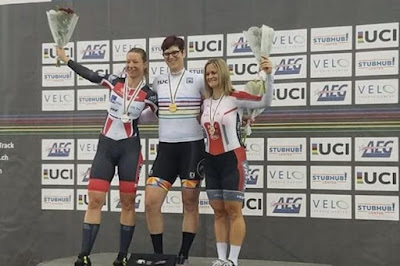 The woman on the left is silver medalist Carolien Van Herrikhuyzen of the Netherlands and on the right is bronze medalist Jennifer Wagner of the USA.

Unlike Powerlifting, cycling is a sport where the most important metric is not pure size or pure strength, it's power to weight ratio (usually in watts/kg), so McKinnon's obviously wider, masculine physique is not as big advantage as it might be in Powerlifting.  She/he says that the smaller Jennifer Wagner had beaten her in 10 of their last 12 races, including the 500-metre time trial earlier in the week.

But, of course, this isn't about the athletic ability, it's about social justice and "muh rights".

“This is bigger than sports, and it’s about human rights,” McKinnon said to USA Today.

“By catering to cisgender people’s views, that furthers transgender people’s oppression. When it comes to extending rights to a minority population, why would we ask the majority? I bet a lot of white people were pissed off when we desegregated sports racially and allowed black people. But they had to deal with it.”

I don't care if Wagner had beaten her 99 out of 100, they shouldn't be competing.  Modern military work for the guys on "the pointy end of the spear" is more like Powerlifting than cycling.  Women shouldn't be in there, either.