Call it the Amish New Deal.  They live an agrarian, pre-industrial civilization, which is what the leftists and greenies want for us all.  True, they have too many farm animals in their lifestyle for the Democratic Socialists, but the rest of the Amish lifestyle seems like exactly what the DemSocs want.  I don't think there are any (or many) Amish vegans, but that seems what they want us all to become. 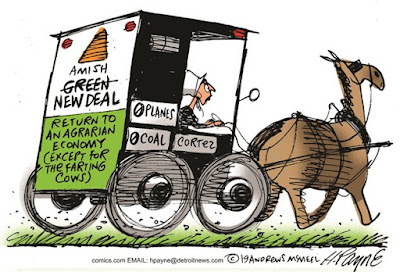 H. Payne at the Detroit News.

I know that Evita Guevara Castro wants us to "invent technology that's never been invented yet", but getting rid of all your petroleum and nuclear power plants expecting the replacement that nobody has ever thought of to be invented and ready when you shut off the existing plants is a rather idiotic plan.

Let me give a concrete example: high efficiency solar cells.  Because some influential "futurist" (cough) publicly said that Moore's law applies to solar cells so that they'll get better every generation, an idea has emerged that says, "the solar panels to power your house will be the size of a postage stamp in the mid '20s".  You might have heard this.  That violates the laws of thermodynamics at the very least.  The solar energy influx, called the "solar constant" is a bit over 1300 Watts per square meter.  Since square meters are bigger than square yards, and I like to have Nice Round Numbers to do mental calculations, I usually say 1000 Watts/sq yard, instead of the more realistic 1100 W/sq yard.

A typical house is budgeted to have a 20 kW service.  That instantly tells you need 20 sq yards of solar cells; 25 kW service would require 25 sq yards, and so on.  Except that would only work if they're 100% efficient, which nothing ever is.  Assume they're 20% efficient, a conservative number to make up for times when the panels are dirty, or covered with bird crap and you find you need five times that area, 100 sq yards of solar cells.   It is physically impossible for a cell to put out more energy than it gets from the sun, so that means the smallest imaginable solar cell array to power a house would be 20 sq yards at 100% efficiency.  I stress that the 100 sq yard "budget" is the only realistic answer now.  Solar cells the size of a postage stamp delivering 20 kW - or even 1 kW - just aren't possible.

I have no doubt that another company like a Solyndra would say they can do it to get grafted onto the Fed's infinite checkbook, but at least what the real Solyndra was selling didn't violate the laws of physics.

I've talked about fuel cell cars and I've talked about battery electric cars.  Fuel cell cars carry the threat of hydrogen explosion from their 10,000 PSI hydrogen tanks.  Both types have inadequate range and difficult charging problems.  The best batteries available for cars deliver about 5% of the specific energy (in Watt*hours per kilogram) of gasoline.  Or less.  Neither technology is within 20 years of being competitive.  Could someone "invent technology that's never been invented yet"?  Of course.  With every major university and every major car maker, along with a ton of startups working on the problem for years, why would anyone think it's just around the corner?

Do you want to jump out of an airplane hoping someone invents a parachute before you hit the ground?  That's the essence of what they're asking for us to do.