I know, right?  The headline that a restaurant which is socialist in concept is going out of business is probably the least surprising headline in the world.  For me, the only surprise was that Panera Bread had started the chain called Panera Cares in the first place.


...Therefore, it created Panera Cares. The cool and different restaurant’s MO? It offered food at a “suggested donation” price.

Doesn’t that sound nice? Let’s all join hands and sing “Imagine” and just pay what we can afford. Personally, I’ve had my eyes on the Mercedes-Benz Maybach Exelero, suggested retail $8 million. I appreciate their suggestion; I’d like to give $124.92 — I have that exact amount on a Kohl’s merchandise card. I hope they like (sorta) high-quality yet affordable clothing and jewelry.

Now here’s a shock to us all: Panera Cares’ll be officially closing on February 15th. As it turns out, when you don’t make people pay for stuff, people don’t pay for stuff. Though there’s no “I” in “team,” there’s a big one in “Incentive,” which the non-capitalist Panera Cares (initials = PC; coincidence?) failed to grasp.

Panera opened the first Panera Cares in 2010 in a suburb of St. Louis, the corporate home town, and eventually extended the chain to Chicago, Boston, Dearborn, and Portland.  When they started the chain, their initial model was that they'd make it if 60% of customers paid regular price and 20% paid somewhat more, allowing the remaining 20% to eat for little or nothing.  Founder Ron Shaich coordinated the launch of the first store with a Ted Talk, saying:


“In many ways, this whole experiment is ultimately a test of humanity. Would people pay for it? Would people come in and value it?”

To me, it's surprising the company kept the chain afloat but I guess the love of socialist ideals dies hard.  One of the capitals of fail was Portland, Oregon, a city apparently striving hard to win the coveted title of Most Dysfunctional City in America.  The Portland restaurant was recovering only 60% of its costs.


[S]ix months after opening in 2011, leaders saw things at the Oregon cafe they hadn’t seen in Missouri or Michigan. Grant High School students mobbed the cafe daily, ordering multiple meals and not paying for them. Homeless people came for every meal — every day — as if the cafe was a soup kitchen. Hollywood neighbors complained of an increase in crime and loitering.

Many problems came down to “a sense of entitlement,” said Panera spokeswoman Kate Antonacci. Though the cafes are an experiment, they must become self-sustaining to survive. The money coming into the Portland cafe was so far below meeting costs at one point that the cafe seemed poised to close.

Founder Ron Shaich delivered an empassioned message in which he tried to convince the Free Shit Army that colonized his store that it wasn't a hand out; it was a “a café of shared responsibility”.  The response was what we've come to expect: “let someone else pay for it”.


By 2016, the Panera Cares experiment appeared to be winding down. The Dearborn restaurant shuttered in 2016, followed by the Chicago and Portland locations. Panera was sold to a private equity firm, JAB Holding Company in 2017. Shaich stepped down as CEO of the fast-casual chain in January 2018, around the same time that the pilot Panera Cares in St. Louis closed down. Shaich told the St. Louis Post-Dispatch at that time that all the Panera Cares restaurants together served roughly 2 million meals during their operation, but “the nature of the economics did not make sense.” With only one location left in Boston, Fast Company rang the death knell of the pay-as-you-go experiment last June, with official confirmation of the final closure coming earlier this week.

The Boston Globe reports the story saying their store will be the last one to go dark on the 15th.


“Despite our commitment to this mission, it’s become clear that continued operation of the Boston Panera Cares is no longer viable,” Panera Bread said in an emailed statement. “We’re working with the current bakery-cafe associates affected by the closure to identify alternate employment opportunities within Panera and Au Bon Pain.” 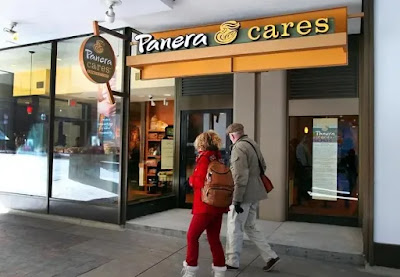