Guess What? Min Wage Goes Up, Hours and Jobs Go Down

It occurred to me some years ago that I'm really tired of arguing minimum wage because every time we argue that the people it's most supposed to help end up being the most hurt by it.  We're right every time, we get ignored every time, and those people get hurt every time.

Guess what?  It's happening in New York, just as predicted.  They're calling it the Restaurant Recession.

Note that this rising wage trend has been going on since 2015, so that cuts in numbers of jobs and hours worked go back to 2015.  The survey also reported that “76.50% of respondents report reducing employee hours and 36.30% eliminated jobs in 2018 in response to mandated wage increases.”

As an example, the website Eater NY tells the story of the small chain, Rosa Mexicano.


Every afternoon at 4 p.m., each of Rosa Mexicano’s four Manhattan locations used to have a pre-shift staff meeting. “That meeting created a really nice family atmosphere,” says Chris Westcott, Rosa Mexicano’s president and CEO. “It created energy and synergy, and people were pumped going into the shift.”

But as of last month, the meeting doesn’t happen anymore. Now, start times for shifts are staggered through the evening, and employees receive a document with the day’s updates when they arrive.

It’s one sacrifice the Mexican chain has made to help offset the additional $600,000 that Governor Andrew Cuomo’s minimum wage increases will cost them this year. The changes — announced on November 10, 2015 as part of a gradual growth — brought wages up to about their cap on December 31, representing a minimum wage hike from $13 to $15 per hour for businesses in New York City with more than 11 employees. Tipped employees’ hourly wage also rose from $8.65 to $10, with a tip credit that guarantees they’ll receive at least $15 per hour, and the changes extended to workers on salary; the overtime exemption rate rose to $1,125 per week in New York City ($58,500 annually).

Servers who still have their jobs are reporting that they're being pushed to do more - work harder - to try to utilize every minute of that $15/hour rate.


Merelyn Bucio, a server at a restaurant in Soho that she declined to name, says her hours were cut and her workload increased when wage rates rose. Server assistants and bussers now work fewer shifts, so she and other servers take on side work like polishing silverware and glasses.

Similarly, prices are reported to be rising as well.  For example, Lalito, a small restaurant in Chinatown, has increased menu prices by 10 to 15 percent.  The restaurant business is a tight margin business so increases in labor costs will pinch the bottom line and may require price increases to break even.  Some try to hold off price increases by reducing "little things" that distinguish the restaurant:


John Seymour, founder and CEO of popular fried chicken restaurant chain Sweet Chick, is holding off on raising prices in his four New York locations. Instead, he’s trying to reduce maintenance costs and cut non-essential expenses. Details like candles on tables at dinner are being reconsidered so customers don’t have to take on the extra cost.

The Foundation for Economic Education posts this graphic of Year Over Year (YOY) restaurant employment changes for full-service restaurants in New York City: 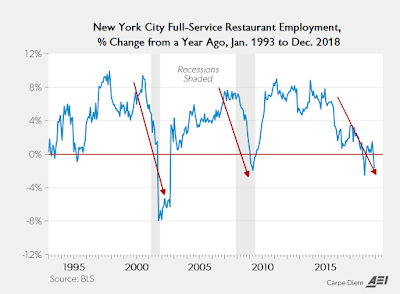 Although they mark recessions (gray vertical bars) and the drop in YOY employment, they leave the two red arrows on the left too steep; starting well before the recessions when YOY employment was doing much better.  Those drop precipitously  in the recession, as opposed to the one on the right that starts its decline to lower growth since the start of Cuomo's minimum wage laws in 2015.  It's obvious that restaurant employment growth has been in decline since the start of 2015.  With a YOY chart, anything above the zero line (horizontal red) represents growth, everything below it is shrinkage.

The article at FEE goes on to explain:

As the chart shows, it usually takes an economic recession to cause year-over-year job losses at NYC’s full-service restaurants, so it’s likely that this is a “restaurant recession” tied to the annual series of minimum wage hikes that brought the city’s minimum wage to $15 an hour at the end of last year. And the NYC restaurant recession is happening even as the national economy hums along in the 117th month of the second-longest economic expansion in history and just short of the 120-month record expansion from March 1991 to March 2001.

It doesn't take a Ph.D. in economics to predict this is going to happen; you might have to be a Ph.D. in Modern Monetary Theory economics to be so delusional that you believe these things won't happen.  I talked with a kid working in a restaurant several years ago who said he didn't want to see our state raise min wage exactly because "everything will get more expensive and the jobs will get harder to find".  This was back in 2013.  Yes, we've been talking about a $15/hr min wage since 2013. 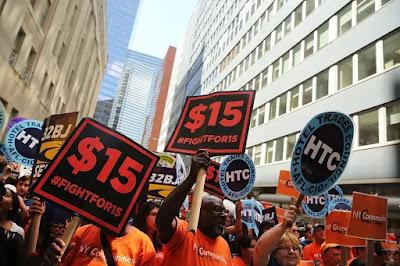