Just How Bad Was the Cold on Electric Cars?

Back during the strong cold snap a few weeks ago... sorry, let me turn on the reverb, during the Po po po lar lar lar Vor vor vor tex tex tex ...  there were stories about how badly batteries were affected by the cold weather.  So how bad was it?


AAA recently studied the effects of cold on EV range and found that when temperatures dropped to 20°F, EV (electric vehicle) range dropped an average of 41% compared to range measured at 75°F.

It does freeze in my corner of the planet, but not very often.  I think the last day we had when it was under 32F around here was in 2010.  Still, I realize that freezing happens on much of the earth and I don't think a fuel source that loses half its capacity in the cold is something I'd be trying to stake the future on.  Perhaps the bigger problem is that it's not only worse in the cold, it's worse in the heat, too.  The range vs. temperature curve is shaped like an upside down "V".


AAA tested five electric vehicles, all with a minimum EPA estimated driving range of 100 miles, in partnership with the Automotive Club of Southern California’s Automotive Research Center. For this study, AAA researchers used a 2018 BMWi3, a 2018 Chevrolet Bolt, a 2018 Nissan Leaf, a 2017 Tesla Model S 75D, and a 2017 Volkswagen e-Golf.

All the cars had between 1,000 and 6,200 miles on them before the test, and all of their battery packs were tested to rated limits before and after the tests.  Tests were conducted on a dynamometer in a temperature chamber.  No warning lights were allowed before or during the test runs.  Lots of details for how they were tested on the Power Electronics magazine article's website.

The striking difference between the BMW i3 and the Leaf makes me wonder what the two companies did differently.  If one car is significantly different from the others, why?  What did the bad one do wrong or the good one do right?  Can we make them all like the good one? 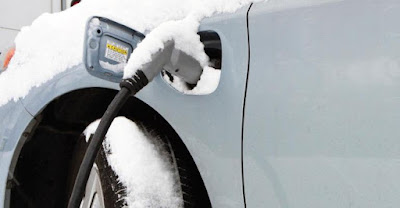 I hope it's evident that hot weather is a problem, too.  Just as running a heater when it's 20F outside sucks battery life and vehicle range, when it's 95 outside and you're running the air conditioner, that sucks battery life, too.  Of course, the air conditioner puts some load on gasoline consumption, while most internal combustion engine cars use at least some waste heat from the engine to warm the cabin, too.  With an EV, everything has to come out of the battery.