Do you have a cardiac pacemaker?  Someone you know?  How about an implanted defibrillator?

All of the current implants are battery operated, which means the batteries need to be replaced.  Battery replacement is generally minor surgery, but it's still surgery and cutting someone open brings risk of infection.

But this is the era of energy scavenging.  For example, hybrid and battery electric cars use regenerative braking.  A motor and a generator are virtually the same arrangement of parts looked at from different ways.  When you no longer want to power the motors but want to stop you can get power out of the motors (now generators) and dump it back into the batteries.  The battery charging load on the generator slows the motor shaft, slowing the car, and some energy that might go into heating the brake pads and wheels goes back into the battery.

There are energy sources in our bodies; can anything be tapped to provide power for pacemakers or other implantable electronics?  Could we harvest body heat?  What about motion of arms or legs?  In what might be the most ironic arrangement, Engineers at the Thayer School of Engineering at Dartmouth have designed a way to get energy from the beat of the heart itself to keep the pacemaker battery recharged.  The charger is:


... a dime-sized piezoelectric cantilever that is both flexible and porous. The new design incorporates a polyvinylidene fluoride-trifluoroethylene thin film within a dual-cantilever structure wrapped around a pacemaker lead with two free ends. The free ends extend out from the pacemaker to harvest energy from the heart’s motion.

It turns out it doesn't harvest much energy, at least in its current version.


The initial test results demonstrated a maximum electrical output yield of 0.5 V and 43 nA under the frequency of 1 Hz. The team found that adding a proof mass of 31.6 mg on the dual‐cantilever tip results in a 1.82 times power enhancement.

The initial values of 0.5V at 43 nanoAmps (billionths of an ampere) is a mere 21.5 nanowatts (nW).  Adding that 31.6 mg mass got that up to 38.7 nW.  That naturally made me wonder what the power requirements really are.  How big of a battery does an implantable pacemaker carry and how long does it last?  I like to bound problems with numbers to help see how big those problems are.  I found this article on Trends in Pacemaker Batteries from 2004.  The first thing I learned is that batteries aren't replaced like you'd replace batteries in your mouse or flashlight: most often, the whole assembly is replaced.


The most important factor for a cardiac pacemaker battery is its reliability. Unlike many consumer products, batteries in implantable devices cannot be replaced. They are hard wired at the time of manufacture before the device is hermetically sealed. From that point on, the battery is expected to power the device during final testing at the factory, during the shelf life and throughout the useful life of the device while it is implanted. In general the power source of the implantable device is the only component, which has a known predictable service life, which in turn determines the service life of the implanted device itself.

Since the first (experimental) pacemaker was implanted in 1958, batteries have changed quite a bit.  That survey article goes through various battery chemistries from Nickel Cadmium through various Lithium battery chemistries to Lithium Iodine, which it implies is the current technology.  It lists some characteristics of a current battery.
The Amp Hour rating of 2 Ah is a little surprising, but think of it this way: that's total use for 8 years, or a bit over 70,000 hours.  2 Ah spread out over 70,000 hours is 28.6 micro amps per hour, and 477 nA per minute.  The output voltage of the little scavenger is too low, but that could be stepped up to what's required with a switching regulator at a loss of about 5 to 10% of the energy being harvested.  That looks like if the person's pulse was 72 beats/minute, there's about twice as much energy in the heartbeats as the pacemaker needs.  In rough numbers, it seems like there's enough energy recovered to be useful in these very low energy devices.

In reality, though, it seems this would lead to total redesign of pacemakers because of the change in what they're doing.  According to that survey article, the pacemaker's controller literally counts every pulse it applies to keep tabs on battery life.  Consider a pacemaker implanted with a fully charged battery that is then kept constantly topped off rather than discharging day after day.  It would be a rechargeable battery because if the person's heart stops, the little circuit wouldn't supply energy to the pacemaker when it most needs it.

The research team is currently working under a National Institute of Health funding grant and has two years left to finish the pre-clinical process and obtain regulatory approval. Engineers on the program have also started to investigate how the technology can be used to charge other implanted devices as well. 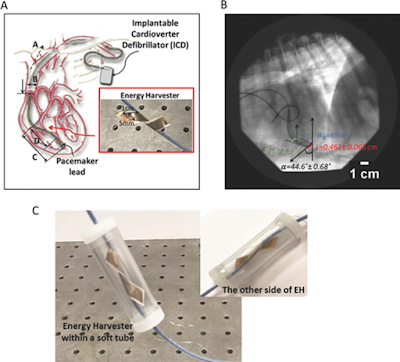