Another Major Anniversary Slips By

45 years ago last Thursday, February 7th, one of the greatest movies of all time was released.  I'm talking about Blazing Saddles.  It's regularly referred to as the greatest movie that couldn't be made today.

In 1974, most of us thought that the worst of the race problems we faced in the 1960s were over with.  To borrow the overworn expression, by that time we really did have friends of all races, creeds and colors.  Entertainment media became mandatorily diverse.  Blazing Saddles took advantage of that and poked fun at everybody, every racial, or cultural stereotype you can imagine.  I'm going to borrow a little from the PJ Media link (first one) because they quote movie reviewers from 1974 and it's worth seeing it through those eyes.

The Hollywood Reporter celebrated the occasion by republishing its original review of Blazing Saddles. Here is an excerpt:

The screenplay by Brooks, Norman Steinberg, Andrew Bergman, Richard Pryor and Alan Uger (from a story by Bergman) is totally irreverent, never passing up a chance to point up a cliche and sparing nothing or no one along the way. The language is definitely R-rated but it never becomes offensive. In fact, the incongruous pairing of the language and the characters accounts for a great deal of the boisterous humor.

Brooks' fast-paced direction is a masterpiece of comedy detail, filled with delightful and perfectly timed sight gags. The predominant style is one of the extremely broad burlesque but the film is also packed with more subtle touches, especially in Morey Hoffman's clever set decoration and in Peter Wooley's production design.

The line about "sparing nothing or no one along the way" is key. Blazing Saddles seems to send up almost everything. And it does it brilliantly. The humor employed is filled with what today would be known as triggers for the emotionally weak, politically correct, Social Justice Warrior crowd.

Ethnic jokes abound. There is enough juvenile sexual humor to keep a thousand generations of pubescent boys entertained. The movie also has the most memorable fart joke scene ever.

These jokes couldn't be written into a movie today.  In fact, there's probably not a scene in the movie that wouldn't trigger today's snowflake audiences.  The snowflakes haven't learned one of the most important lessons of life: when everything is offensive, nothing is offensive.  What Mel Brooks, Steinberg and the creators did was to offend everyone, so that nobody felt offended.  Instead, everybody laughed.

The problem with curing racism and getting people to not care is that there's no money in it, while there's tons of money in race-hustling.  When society started to get along better, that's trouble for those who want to tear it apart and rebuild it, or fundamentally transform it into some sort of dystopian horror story.  They need to always enforce on some that they're the victims of something, anything.


It's almost sickening to think of the fact that we've gone from a society capable of creating and supporting something as masterful as Blazing Saddles to one filled with humorless youth who would protest it to death before it could get released in just forty-five years.

A humorless society that seeks to make words criminally offensive is a society in severe decline. Hopefully, we're just in a phase from which we'll soon emerge.

Should we be that lucky, maybe movie comedies will one day again be funny. 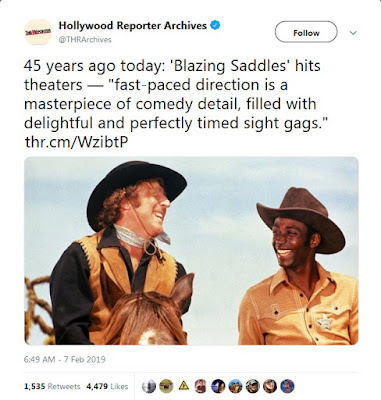