As the Democratic field for the 2020 presidential race gets a little more crowded every day, the Democratic Socialists push a little harder and the whole party gets a little farther left with time.  Not so much a constant drift; more like an earthquake fault slipping.  Some friction keeps the fault from moving for a while, but when the stress gets high enough the fault slips and the platform lurches a bit farther left.

So it is that Minnesota representative Ilhan Omar, who has been almost a constant fountain of misinformation whenever she's in the press, said we should look at 90% income tax rates.


Weeks after Rep. Alexandria Ocasio-Cortez, D-N.Y., made headlines by calling for a top marginal income tax rate of 70 percent in an interview with “60 Minutes,” her fellow freshman congresswoman, Rep. Ilhan Omar, D-Minn., suggested that the rich could pay even more.

“There are a few things that we can do,” Rep. Omar said in an interview with “Through Her Eyes.” “One of them, is that we can increase the taxes that people are paying who are the extremely wealthy in our communities. So, 70 percent, 80 percent, we’ve had it as high as 90 percent. So, that’s a place we can start.”

The reason this caught my attention is that 90% income tax is an internet meme that started back during the 2016 race.  As far as I can tell, it was started by either Bernie Sanders, Paul Krugman or perhaps Michael Moore.  Perhaps all of them got together, in which case I would assume a bong the size of King Kong's toilet bowl was involved, but that's speculation on my part.

The meme is the fact that America was doing its best in the post WWII period when the top marginal tax rate was 90% wasn't a coincidence; America was doing great because of the 90% tax rate.  It had nothing to do with the fact that most of the industrialized world outside of the US had been bombed back to the stone age, and not only did we not have remotely as much competition for exports, we were helping to rebuild both our allies and our former enemies, Germany and Japan.

Andrew Syrios at the Mises Institute does an extensive analysis of this.  He starts out by noting how different the tax structure was when the top rate was 90%.  Today, there are seven tax brackets. In 1989, there were only two. In 1955, there were an utterly ridiculous twenty-four different tax brackets.  In this chart, read the tax rate on the red curve and right scale, and the income it taxes to qualify for that rate on the left, in blue.  The year is on the bottom.  An effort was made to make this constant dollars (account for official inflation). 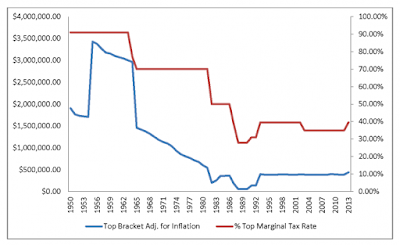 It's also important to note that the top rate is just the rate on that last dollar earned.  A study from the Congressional Research Service concluded that the effective tax rate for the top 0.01 percent of income earners during the period of 91-percent income taxes was actually 45 percent.  (The effective rate is your total tax divided by your taxable income.  For example, if I make $20,000, I owe 10 percent under today’s tax code, but only on any income over $18,450 (filing jointly). So I only owe 10 percent of $1550, or $155. Yes, my marginal tax rate may be 10 percent, but my effective tax rate is 0.78 percent.)

Longtime readers around here will recall mention of Hauser's Law.  I'm still a little uncomfortable calling it a law because it's not a "law" in the sense of the laws of nature, but it's the handy observation that since the early 20th century, the tax revenue collected has remained rather constant despite those wild differences in tax rate shown above.  Simply, people adjust their lives to pay less tax.  Syrios shows another chart that very clearly demonstrates Hauser's Law: 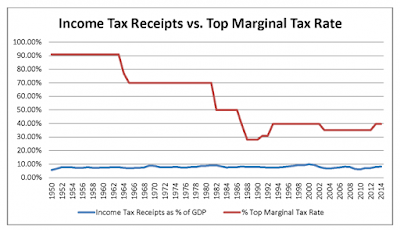 Simple-minded people like Pistachio Kotex or Ilhan Omar Abdullah will believe that tax revenues will go up enormously in this change.  Data says that if they did raise the top rate to 90% that revenues wouldn't go up as much as they think.  Revenues can go down after tax rate hikes.  It has happened.

Regardless of all that, the fact remains that the rich never paid 90 percent of their income in taxes or anything even remotely close to that.  The idea that we'll punish the rich to pay for everything is simply hatred and class envy.  Unfortunately though, some memes die hard.