Electric Cars Have the Same Problems As Always

It's the same bugaboo as always: driving range.  Which really comes down to recharging times.

In an unusually cogent look at the realities of the electric car market, author Charles Murray writes a piece for Design News titled, "The Electric Car's Same Old Problem".  For those unfamiliar, Design News is a engineering trade publication primarily aimed at Mechanical Engineers, not electrical.  I tend to link to them fairly frequently.


One unwritten rule of product design says that if you’ve given your customer a popular feature, don’t dare take it away.

Therein lies the problem with the mainstream electric car. Today’s cay buyers have been spoiled. They assume that they should be able to take their cars on vacations, on weekend trips, or on treks to drop the kids off at college. Thanks, gasoline.

Electric car enthusiasts don’t like that argument. And to some degree, they’re right. On average, driving is mostly about short trips – to work, to the gym, to the grocery store. Unfortunately, modern consumers don’t buy cars based on their average needs. They buy for their exceptional needs.

While I like to think of most of the engineers I've worked with as rational, being facile with technological problems doesn't necessarily make engineers immune to the impulse of wanting to control other people.  Witness the comments where readers think the solution is to get families to have two cars: one for around town and one for longer trips, or other fanciful social engineering.  (I'm assuming they're engineers or have a technical background just to qualify for a subscription).

It's a fundamental problem and Charles Murray hits the nail squarely on the head.  We tend to buy our cars for the expected uses even if the "worst case" isn't very often.  People expect to be able to get in a car and drive across the country - or just a couple of days - even if it's once a year or every other year.  This comes "for free" with a gasoline powered internal combustion engine.  Gasoline or diesel are tremendously better at energy storage than batteries.  While battery makers desperately try to figure out how to reach a specific energy of 450 Wh/kg (Watt-hours per kilogram), gasoline already offers 12,000 Wh/kg.

A basic problem is that even with the taxpayer subsidies, nobody is making money on electric cars.


Volkswagen, which is doing penance [for fudging EPA emissions tests - SiG] by loudly proclaiming its commitment to electric cars, admitted to The Wall Street Journal recently that “small battery-driven vehicles won’t be cheaper than their diesel equivalents until 2030.” And GM exec Mark Reuss  told reporters that his company wants to be the first to produce “electric cars that people can afford at a profit.” Implied was the fact that GM and its competitors aren’t making a profit on EVs today.

No one was ever more forthright about this matter than Sergio Marchionne, the refreshingly honest chief executive of Fiat Chrysler Automobiles. Talking about his company’s all-electric Fiat 500e in 2014, he said , “I hope you don’t buy it because every time I sell one it costs me $14,000.”

There is talk in the industry that Washington is going to cut the tax credits for electric cars, predictably leading to talk that the sky is falling.  Perhaps it will for electric car makers.  The electric car fanboys complain that gasoline powered cars also get taxpayer subsidies, but apparently never suggest that all such subsidies, including those for solar, windmills and other fantasy-based uses be halted.  I've only seen advocates of internal combustion engines utter such heresies.

Is Volkswagen right in thinking that small, battery-driven EVs won't be cost competitive until 2030?  I'd trust the industry before I'd trust people who don't actually do anything, like think tanks or the EPA.  As Charles Murray put it,


You can’t ask consumers to give up a feature they already have, and then tell them they have to pay more for it.

Unless, of course, you want to lose money. 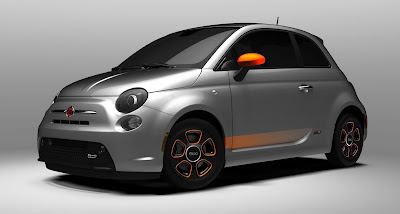 The kinda-sporty Fiat 500E.  Besides costing Fiat Chrysler $14,000 if you buy one, if you're a big guy, you could probably fit it in a coat pocket.