A Dog Who Sniffs Memory Chips? Color Me Skeptical

A friend sent me this video from ATT.net of a dog from the FBI who can search out data memories.  I can't embed it here, so that's a link to the two minute NBC News video.  The summary is:


Iris is one of many on the force who have the ability to do something that seems unimaginable: to smell digital storage media — computer chips — making them invaluable for law enforcement.

Supposedly, the dog doesn't react to other electronics in the room, but can find hard drives, flash drives and other forms of memory storage.  The Daily Mail digs a little deeper into the story, saying,

The dogs are trained to ignore other parts of the mobile phone or computer and not to touch the batteries.

While we know dogs have incredible sense of smell and can detect scents no human can possibly detect, this one leaves me with Looney Tunes style cloud of question marks over my head. To say the dog doesn't respond to other electronics but can spot a thumb drive just doesn't seem believable.

Let me point out that I never worked in the semiconductor business and never worked in packaging those components.  That said, I have the typical knowledge someone from the Hi-Reliability world will have.  I know about epoxy packages, ceramic packages, metal cans and much of what the packaging folks use.  I don't think it's possible for a dog to discriminate between a memory chip and any other integrated circuit because I think the same epoxy formulation is used in many places.  I know I get a lot of very smart readers including all sorts of engineers and I welcome your input, as I always do.  Are there some special compounds only used in memory packages?  According to some brief web searches, I'd say no.  There's no special mix for memory chips.

In the video linked at the top, they show Iris the black lab detecting hard drives and flash drives.  Nice, but those are very different inside.  A hard drive generally has some memory chips in it like the flash drive has, but the flash drive doesn't have any of the large mechanical features the hard drive has: no magnetic platters, no motors, and so on.  What they didn't show or talk about is what happens when Iris is in a room with an iPod or audio amplifier or plain old system that doesn't have digital components but has epoxy packaged linear circuits.  This is the inside of a thumb drive.  In addition to the two larger ICs marked, the "USB mass storage controller device", and the "Flash memory chip", smaller epoxy packages are seen at the right in the bottom view.  Those appear to be transistors. 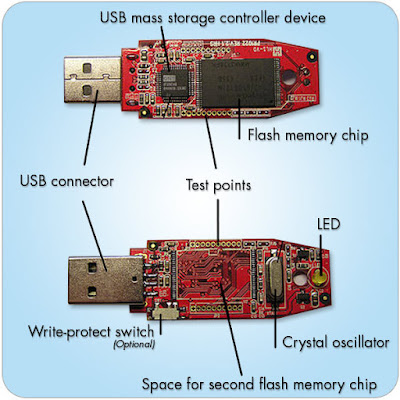 Right now, most of our homes are literally stuffed with plastic-packaged ICs.  Not just our computers, tablets and phones, but many of our refrigerators, ranges, stoves, TVs, radios, air conditioners and on and on. Unless you've made a concerted effort to have no electronics in your house, you're surrounded by it.

Iris would be running around like a Pointer with OCD, shouting, "there it is! ... there it is!... no... it's here!...no...here!".   In many situations, people verifying the performance have found that the dogs were being given subtle cues by their handlers that they were getting close to the things the trainers had planted and not really finding them by their own means.  I wonder if that's what's really going on here.  Why the FBI wouldn't be exaggerating the abilities of their dogs as a psyop against criminals, would they?  Can you imagine?