On the far side of the Atlantic, the debates in the scouting community are a bit different than here in the Collapsing States of America.  On our side, we debate whether people should use bathrooms that match their "factory standard plumbing fixtures".  In Europe, they're actually debating whether Europe survives.  Even if they don't know it, as is the case with this young girl.  PJ Media tells the story.


This past May Day, much ado was made about one Czech Scout, Lucie Myslikova, who dared to confront a Neo-Nazi demonstrator while wearing her scouting uniform. Google the event and you’ll get a slew of headlines about the teenager who “Stood Up to the Far-Right” and the photo of the “girl standing up to a skinhead” that went viral.

The media went into full-tilt fawning mode.  A schoolgirl crush on a schoolgirl, if you will, and emphasized that angle, not the discussion itself.  It's such a dramatic image!  That'll sell us some magazines!! 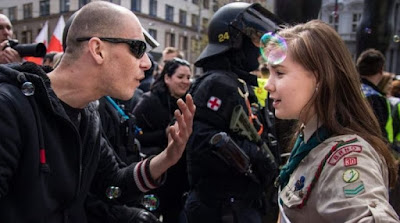 But what were the girl scout and the "Neo-Nazi" actually talking about?  It becomes a bit harder to find out than you might think.


What, exactly, was she discussing with the skinhead? “The nation,” “borders,” and “migration.” The details of the discussion were quickly brushed aside by Western media anxious to highlight the image of a young woman confronting an adult male—something Fortune was so impressed with that they spun it into a montage of photographs of women staring down men at political rallies across Europe.

It turns out, you need to read French to find out.


If you want to know what she actually said, you’d have to translate an article that appeared in the French language publication the Paris Match. There, buried in the last paragraph, is a quote from the exchange between the Scout and the Neo-Nazi regarding immigration. When the Neo-Nazi asserted the teen would be “violated by those she defends,” Myslikova replied, “Even if something happened to me, the physical wounds always end up healing.”

It's hard to be that naive, but I'll cut her some slack for being a child.  She has clearly never heard of nor seen someone who was killed by the "physical wounds (which) always end up healing".  It's a stunning ignorance of reality in the name of some globalist's diversity agenda.  The European death wish in one sentence.


A girl wearing a Scout uniform willingly acknowledged that she could be raped by an immigrant, something that is happening to women across Europe in record numbers. Then, she essentially reasoned, I’ll get over it, and the Western world lifts her up as a hero. She justified rape in the name of political discourse. A Girl Scout opened herself up to sexual assault for the sake of her political beliefs.

France may have voted for their perceived lesser of two evils, but what they did is ensure that the Islamization and subsequent destruction of Europe will proceed unabated.  About eight or ten years ago, I heard Mark Steyn saying if an American wanted to go see the great capitals of Europe, they had about five years before the trip would be meaningless.  I think he got it pretty close.  Yes, there are one or two bright spots in Europe, but the Dark Ages are descending.