Steven Crowder - It's Not Time for Unity, It's Time for An Alliance

As in the Allied powers of WWII.  Steven Crowder takes a break from writing comedy for his channel to do a video on the attack in Manchester last night .

Like most of us, I'm sickened by the murder of innocents in the UK; this time young girls.  Apparently a venue full of girls in the (I've read) 10 to 20 age group was chosen as a way to outrage westerners, because in their minds if some "westerner" goes and kills a random mooslim, that will cause the so-called "moderate" mooslims to endorse Isis and cause the battle for the end of the world they're trying to create.  That it's a sick, twisted view of the world is an understatement.

Crowder wrote an accompanying piece for the Blaze with some highlights.


If you want to practice Islam in the inconsequential, semi-secular sense. Fine. But the only way to solve this problem is to recognize that POLITICAL Islam and anyone who follows its prescription is inherently incompatible with Western values.


These are the kinds of values that progressives would defend against any radical Christians who believe any of the above. And rightfully so. So why can’t we all agree on these universally? Anyone who holds any of those beliefs is by definition, incompatible with the Western world.

People are giving President Trump crap for calling them “losers.” Listen, the guy isn’t eloquent, but he’s right. These terrorists fear shame more than death. It’s why Abu Ghraib was such an outrage when American, female soldiers stripped them naked and laughed at them while dogs barked. To them, that is a far greater punishment than death or even torture. If any American received said treatment at the hands of ISIS, we’d thank the Lord above that we weren’t being burnt alive in cages. We don’t merely punish terrorists through death. We punish them through shame.

At least ONE leader is willing to give it the old college try. So today, I stand with the president of the United States instead of trying to mince words on social media and virtue-signal about how much “unity” we need. We don’t need “unity”. We need an alliance. There’s a difference. 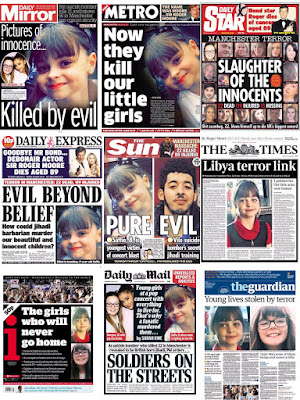 For as bad as the attack was, Miguel at GunFreeZone posts a twitter capture that may just be worse, at least as a warning sign. 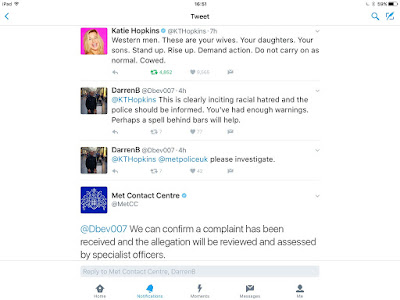 British journalist Katie Hopkins posts a message that sure lines up with my view.  "Western men.  These are your wives.  Your daughters.  Your sons.  Stand up.  Rise up.  Demand action.  Do not carry on as normal.  Cowed."  For which she's reported to the police for "inciting racial hatred" - hate speech - by SJW DarrenB.

That is probably worse than the attack itself. The attack was awful, but it’s the deliberate actions of a bunch of evil murderers trying to incite a war.  Evil is as evil does.

The response, though, is the DarrenB saying “Kill a few more of my daughters. Have you tried raping my wife?  Take over the country and I’ll be your slave.”

It's the Death of the West in one Twitter exchange.