Back in late April, the "scientists say" study of the week became a study from the American Heart Association's journal Stroke which said drinking as little as one diet soda a day led to a nearly 3x relative risk of ischemic strokes (loss of blood flow) or Alzheimer's disease.  (The exact numbers were 2.96x for stroke and 2.89x for dementia)  The conclusion of the piece was that artificially sweetened soft drinks were associated with the increased risk while sugar-sweetened soft drinks were not.  The press immediately jumped into action saying "one diet coke a day triples your risk!".

So what's going on here?  Is this meaningful?  Is it presumptuous of me to call a study in a prestigious journal junk?  Stay tuned...

To begin with, the study used nice-sized groups; sure I'd like to see bigger (by at least 10 or 20x and preferably 100x) but they weren't really small groups of < 100 like you sometimes see.  They used 2888 participants over age 45 in the stroke portion and 1484 over 60 in the dementia portion, and the study was conducted over a long time, from 1991 to 2011.  That sort of makes me wonder why it took them until 2017 to announce this, but perhaps they had "bigger fish to fry" and were looking for other associations first.  The biggest disadvantage is that it was a Prospective Cohort study, which attempts to find associations.  How the study was completed was by food-frequency questionnaire at 3 to 4 year intervals,   So, real quick, how many diet sodas did you drink per day in 2014?  This sort of recall by questionnaire stuff just isn't very accurate.

No study of this kind can prove cause and effect, it can only show that two things are associated with each other.  The cliche' example is that firemen are associated with house fires, but nobody thinks firemen are the cause of house fires.  Just like the firemen being at house fires, it may be that they're associated for a different reason.  A prospective cohort study can't prove cause and effect but is useful for finding associations to study with double blind, controlled studies.  Those, unfortunately, are ferociously expensive, and therefore completely impossible to conduct for 20 years, like this one.  There some minor disclaimers for really strong effects, if a plausible mechanism is postulated.

The thing about this study and its reporting that immediately gave me grief is that it said, "artificial sweeteners" as if it was one compound or class of compounds.  Not even close.  It implies that they're all involved in some sort of mechanism, but no such mechanism is known.  Artificial sweeteners?  Aspartame is a dipeptide,  which is chemically more like a protein (extremely simple...) than a sugar; saccharin is an aromatic compound, unlike sugar or aspartame; in contrast, sucralose is a sugar, just not metabolizable and acesulfame (or Ace K) is another aromatic.  I think those are the sweeteners mostly found in diet sodas although my "artificial sweetener recall questionnaire" doesn't show what was in diet drinks in the 1990s.  The sugar alcohols like sorbitol, xylitol, mannitol and so on are, well, sugar alcohols and are probably more like a sugar than the others mentioned but they're used more often in other foods than sodas.  All of those compounds are handled differently by the body, so it makes me ponder what could they have in common.  If this disparate group of compounds is doing something, it can't be chemical.

The authors didn't actually put forward an explanation, just the usual refrain: "more research is needed", which is fine; "more research" is what researchers do.

I have a suggestion.  What they've found is that people on diets drink diet soda.  They've found a correlation with something else; people who may have been told they were at risk for Something by their doctors are trying to lose weight, or "get healthy" and are cutting out sugars because of that.  Or they're dieting because they think they should for some reason.  The people in the over-45 stroke cohort or the over-60 dementia cohort who are still drinking sugary drinks are the exception, not the norm.  To say the strokes or dementia associate with drinking diet sodas is looking at the problem backwards.  The risk didn't come from the diet sodas, it came from whatever caused them to start drinking diet soda in the first place.  Find out what the people who were drinking sugary drinks and did not have strokes or dementia were doing that allowed them to do that.  Other than having chosen better parents.

What's my interest, other than just curiosity?  I typically have one diet soda per day; I can think of days when I've had two, but I can think of plenty of days when I haven't had any.  Mrs. Graybeard and I refer to studies like this as he-who studies, or just he-whos: he who drinks one diet soda a day triples his risk of a stroke or dementia.  The media loves he-whos because they require no thought and can be dramatic; just present the press release.  Sodas in general and diet sodas in particular are demonized by a certain segment of society so there's a ready audience.  I look at sodas like everything else:  there are trades involved, everything has a cost/benefit ratio.  Don't think changing from sugary soda to diet soda will fix all your problems, but I don't think changing from soda to unsweetened tea or plain water will fix all of your problems either. 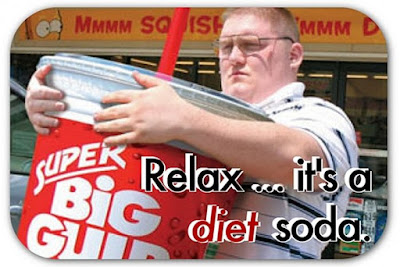 Hey, I said I had one per day, didn't I?  Just kidding.  Image stolen from.