How Many People Has the TSA Gotten Killed?

Last Friday, those of you who get the newsletters from Ammo.com received a link to a story on the TSA.  That story, combined with the post from ASM286 on Borepatch today, about the Lesson of Manchester got me thinking.

One version of the Law of Unintended Consequences says that no matter how good the intent, or indeed the actual construction of a program, there are always unintended consequences.  They may be hidden or they may be slap-your-face obvious but they are always there.

An undeniable aspect of the TSA's Airport Security Theater of the Mind is that it's annoying; something that people put up with simply because they have to.  That leads to an unintended consequence: people will say "I'm not putting up with that for a trip that's an easy drive" and will drive to their destination instead of flying.  Driving is more dangerous than flying, statistically.  Using that information, some researchers have concluded in a 2005 journal article that


We find that driving fatalities increased significantly following the terrorist attacks of September 11, 2001, an event which prompted many travelers to substitute less-safe surface transportation for safer air transportation. After controlling for time trends, weather, road conditions, and other factors, we attribute an increase of 242 driving fatalities per month to additional road travel undertaken in response to 9/11. In total, our results suggest that at least 1,200 additional driving deaths are attributable to the effect of 9/11. We also provide evidence that is consistent with the 9/11 effect on road fatalities weakening over time as drivers return to flying. Our results show that the public response to terrorist threats can create unintended consequences that rival the attacks themselves in severity. [Bold added - SiG]

242 fatalities per month??  Depending on exact model and carrier, a Boeing 737 might carry between 85 and 200 people.  The reaction to the TSA causing 242 fatalities could be the equivalent of two or three fully loaded 737s crashing and killing everyone on board every month.

Unfortunately, that's a snapshot study so while we can think it has gotten worse in the 12 years since 2005, we don't have real numbers.  They say that drivers were returning to flying, but we also hear air travel is increasing so perhaps those two trends offset each other.  If the number of 242/month has stayed constant, we're talking on the order of 3000 people dying from the TSA itself.  9/11 itself officially claimed 2996 lives, so it's possible that the TSA has killed as many people as the terrorists themselves.

The TSA would say it's not their fault that those people died.  The fault lies with the people who decided to drive rather than go into the loving care of the TSA and airline reaccommodation.  I'm going to reference IMAO on this, from a completely unrelated topic.


And that’s how government rolls: burn down your house, then blame you for choosing not to continue dwelling on the ash heap.

But if you do decide to face Uncle Pervy of the TSA, there's another unintended consequence: the TSA is completely, horribly ineffective at what it's supposed to be doing.   It's the worst kind of security kabuki.


During covert tests conducted by the DHS in 2015, TSA agents failed to detect guns and fake explosives 95 percent of the time. In one test, an undercover DHS agent was stopped and received an "enhanced" pat-down search after setting off a metal detector, but the TSA screener failed to detect the fake bomb taped to the agent’s back.

If the BATF is the "F Troop" of federal law enforcement, they finally have someone to feel superior to.  Clever Hans, the horse that was famous for knowing arithmetic almost 120 years ago, could look down on the rank and file TSA.

A 95% failure to detect bombs and other contraband, of course, means that if someone suffering Sudden Jihadi Syndrome had actually tried to sneak a bomb onto a plane, there's a 95% chance they would have succeeded.  If there had been two trying on the same day at different airports, it's a virtual certainty that one would have succeeded with only 1/4% chance of them both being found.  If a duplicate of Operation Bojinka happened with one suicide bomber at each of 10 different airports on one day... well, you can complete that sentence.

Still, that all might well pale in comparison to the biggest unintended consequence: the kind of mass murder the TSA could facilitate even if they caught everything they should catch - as ASM286 points out over at Borepatch's.  It doesn't require the TSA to mess up at all, just do what they do with the crowd in the airport.


The lesson of Manchester is you don't need to get on a plane, into a secure area, or past a search.

Think about that the next time you're standing in the cattle chutes with your shoes in your hand hoping you don't get selected for extra screening. All those people in line with you haven't been screened yet either. That rolling suitcase the next guy has could be his underwear and socks for a week or it could be another nail bomb like the one at Manchester. 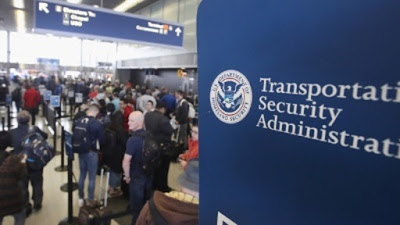 (Source: Click Orlando)
While problems like that remain, private security employed at various airports around the country has been tested and found to be better at their jobs than the TSA.


Private screeners at SPP airports (Screening Partnership Program) have proven themselves to be more efficient and more effective than the TSA. A report by a House oversight committee in 2013 found that private screeners at San Francisco International Airport were much better at detecting prohibited items than TSA screeners at LAX, and wait times were shorter. As a result of the report, calls are growing in Congress to abolish the TSA and return to private screening companies.

Having flown out of one of those SPP airports, abolishing the TSA and going back to private contractors is a move I could get behind.