Best Video of a SpaceX Booster Landing Yet

Yesterday morning, SpaceX launched a secret payload for the very secretive National Reconnaissance Office, NROL-76.  Since these launches are visible from the backyard, that's where I went to see it.  The view was bad - blame it on the neighbor's trees and an ill-placed cloud - but their livestream feed of the launch was excellent, and the combination of excellent angle to the sun and generally bright, clear skies gave us the best view ever of the return of their booster.  The first stage landed on a bulls eye pad, about 9 miles south of pad 39A, where it was launched from.  This is a new vehicle which they plan to inspect and re-fly if it's in good enough shape.  Enjoy the video:


As I usually say, watch it in full screen and the highest resolution your connection supports. The launch isn't until 12:00 into the feed, so you can skip over that much if you just want to see the flight, and skip further ahead to 14:15 for first stage separation and the video that follows.

The range infrastructure that SpaceX leases includes tracking cameras from the Space Shuttle era that lock onto the booster and all the cameras to film it virtually all the way up and down.  The booster can be seen separating from the second stage, and beginning maneuvers to return to the Cape while still coasting toward its apogee at about 150 miles altitude.  The visual that stood out to me was the large bursts of nitrogen, used as thrusters to help maintain the position of the orientation of the booster.  They're very dramatic, looking like white jet spray coming out of various places on the booster. 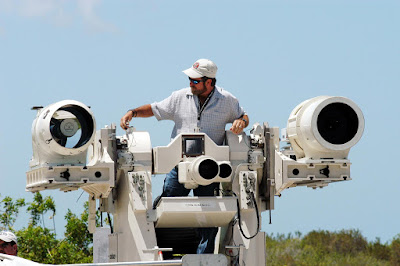 One of the tracking cameras - Wikipedia.

It's the coolest video of one of these landings I've seen.  While I haven't kept a spreadsheet of missions or anything, I read the last six attempts to land a booster have succeeded. Before that, there as a string or three good out of four.