A couple of days ago, Bloomberg published a piece on retirees that made my jaw drop.  "Rich Retirees Are Hoarding Cash Out of Fear".  It seemed incredibly uninformed about the reality for retirees and never mentioned things that seem to me to be major drivers of behavior.

I suppose I should point out that I don't think I qualify as a rich retiree.  I think I'm a middle class/ working class guy who managed to retire.  Maybe I shouldn't extrapolate my concerns to the real rich people they're talking about. On the other hand, the article is so ... dense, so full of wrong assumptions and bad thinking that I just can't let it slip by.

That aside, it's hard to know just where to start with the Bloomberg piece, but the opening sentence is this:


There’s a time in everyone’s life to save. There’s also a time when you’re supposed to spend. That time is commonly known as retirement.

I think that's a strange way to put it.  Yes, we save for retirement and spend down our savings for the rest of our lives, but in our case, we've found our expenses have dropped quite a bit.  Going to work has costs associated with it.  Clothes and shoes, gas for the cars, and a bunch of other more minor expenses that we find we don't have - or have quite a bit less often.  Furthermore, it's a general rule that as we get older, we need less because we've bought it already.  Sure, we need to spend money on repair and replacement of some things, and some new things, but how many people do you know who have regular garage sales or donations or even rent a storage warehouse because they have too much stuff?  That's what happens as you approach retirement age.  We're spending less because our expenses are lower, not fear.


Millions of Americans aren’t doing that, however, which has put the U.S. in a perverse situation. Younger generations aren’t saving enough as their income slips further behind previous generations. Older Americans meanwhile sit atop unprecedented piles of assets built through stock market and real estate booms.

Yet these retirees, or at least the affluent ones, aren’t spending it. It turns out they’re afraid of the unknown.

At a retirement planning seminar held at work, the number one fear in this room full of people approaching retirement was ... outliving their money.  Given that fear, what's the most likely thing people are going to do?  Watch their spending.  Bloomberg goes on to say that on the average and adjusting for inflation, retirees are entering their 80s richer than they were in their 60s and 70s.  That's saying their savings are still returning for them.  That's a good thing not a bad.

Yet there are forces in society who want you to spend.  The article quotes several sources as studying the "problem" of why retirees are spending as much as these experts think they should.   They ask why. 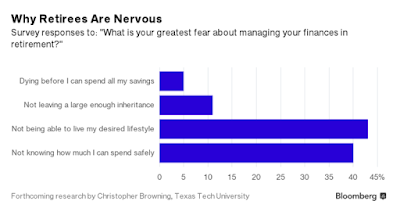 Notice the wording of the least common fear, "dying before I can spend all my savings", is actually the opposite of the most common fear in the seminar where I worked, "spending all my savings before I die".   The other two big fears are more in line with it.  Not being able to live my desired lifestyle (I'll add "on what I have saved") and not knowing how much I can spend tie directly to this fear of outliving our money and being financially ruined by disease or one of the ravages of aging.  No one wants to live out their last days, cold, homeless and starving.

One of the researchers behind this is Texas Tech University Professor Christopher Browning, who actually says, we need to "train people to spend".  He says that even as retirees live longer, healthier lives, they’ve become more pessimistic about the economy, the stock market, and their own financial situation.  They go on to say that financial planners and advisors should emphasize teaching retirees about ways to generate a more stable income, something more like a regular paycheck.

No.  The answer is to let the free market set interest rates and not the central banks.  The central banks are the single biggest threat to retirees and their earning powers.  There's no way of knowing how many retirees they've actually killed.

The problem facing everyone who attempts to live on savings in retirement is Yield Purchasing Power and that's 100% a function of the Federal Reserves' ZIRP and the phony money we're forced to use.

What does this mean for anyone with less than what they need to support themselves—$100M and rising? They must liquidate their capital, and live by consuming their savings. It’s terrifying to anyone in that position—which means anyone in the middle class.

The whole purpose of the horrible ZIRP policies, policies that have distorted our economy into some sort of abomination, is to "train people to spend"!  It's the most likely reason for the worldwide war on cash: to force people into spending.  Right now, if they charge negative interest rates, you can stick your money in a safe, like they did in Japan, or you can invest in Bank of Sealy.  If there's no such thing as cash, you can't stick cash in a safe.  You're screwed.  You're forced to either spend your money or watch it evaporate.  It gives them nearly total control over you.

The real problem with all the policies intended to "train people to spend" is that there's no real data showing it works.  The planners say, "if we make it hard on savers, it will make more sense for them to spend".   Instead, real people seem to be saying, "if the interest rates are so low, I really need to save more".  The problem of an economy based on debt is that when people don't need to constantly buy more, it crashes the economy.  That's what the whole "train people to spend" is all about.

We shouldn't be burning off our savings and if we had a real-money economy, we probably wouldn't need to.  From my piece on Yield Purchasing Power from '15,  I quoted from someone using the analogy of thinking of our savings as a family farm we've built and grown over our careers.


To come back to the analogy of the family farm, people should think in terms of how much food it can grow, not how much food they can buy by selling the farm. The tractor is good for producing food, not to be exchanged for it. Why, then, do people think of the purchasing power of their life savings, in terms of its liquidation value?

Why? We're forced to by Fed and the central banks.