If You Can Figure Out How to Invest in Somali Pirates, Go Long

According to a piece in Power Electronics magazine, it appears that there are plans to make the world's cargo ships unmanned and autonomous.

It might be a good time to get invest in piracy on the high seas.  Is there a Horn of Africa Pirates Association - HAPA?  Association of Somali Freelance Merchant Marines?   Something like that?

I obviously joke here, but that was my first response when I read the piece.  Sure, there are sound reasons to remove the crews and make the system autonomous.  Crews take up room and add costs, taking the place of more cargo.


There are a number of obvious advantages to going crewless. Designs will eliminate the quarters, mess, stairs, doors, and just about everything else people use. One upshot of this is loads of extra space, available for more cargo. Another is a more streamlined exterior. It even enables the weight to balance out nicely. Traditional ships have a lot of weight in the stern, thanks to the bridge. The lighter center is buoyant, bending upward and requiring heavy ballast, often in the form of water, that is hauled around for no other purpose than to keep the ship level. Take away the superstructure, redistribute the weight, and it will reduce the ballast needed.

In addition to the "quarters, mess, stairs, doors, and just about everything else people use", there things like HVAC (heating, ventilation, air conditioning), food and water, and other life-sustaining systems all of which add to the demands on the ship.  Not just space, but weight and electrical power.  With the lower weight of the vessel, the lower wind resistance, and lower power requirements, analysts expect a 10 to 15% fuel savings, for a typical cargo vessel. 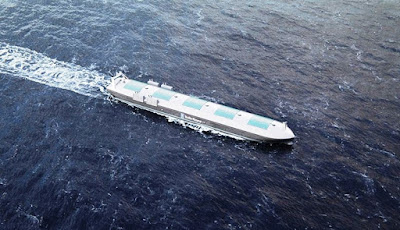 Compared to cars or trucks on the highways, travel on the open seas is a pretty simple problem.  Certainly there are navigation issues, but those aren't really a big concern in the era of GNSS systems (Global Navigation Satellite Systems, the combination of GPS, Galileo, Glonass and more).  Likewise there are weather concerns; in October of 2015, the cargo ship El Faro went down in the Bahamas during Hurricane Joaquin, but that's a rare occurrence today.  A ship's exact heading is determined by the currents, winds and other physical conditions.  All of those can be sensed onboard and adapted to.  Detecting other ships can be by onboard radar, or by radio systems.  The way ships are expected to behave around each other are spelled out in details in the Colregs - collision regulations - a modern incarnation of old, established laws.

One version of an autonomous and zero emissions ship is planned to start in the latter half of 2018, although it will be a conventional manned ship for its first year.  Its role will be shipping products from YARA’s Porsgrunn production plant to Brevik and Larvik in Norway.  Autonomous and 100% electric, YARA Birkeland will be the world’s most advanced container feeder ship. 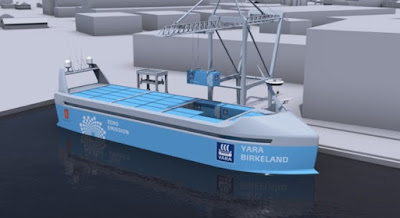 (which doesn't look anywhere near as cool as the previous picture)

The problem with an autonomous cargo ship isn't the open sea, it's everything within a couple of miles of the port.  Big ships start slowly, stop slowly, and aren't very maneuverable.  It's tricky to maneuver one into a docking berth.  In general, large ships don't navigate into and out of ports themselves; they are brought in and out by local pilots who are very familiar with the hazards of their ports.  This generally involves tug boats and putting pilots onto the inbound or outbound ships.


One way that might look, says Levander, is a sort of hybrid. A ship on the open sea, traveling primarily straight ahead with little in its way, will be controlled by an onboard computer, with the occasional oversight of a land-based operator who may manage hundreds of different ships at once. As it comes to port, or enters a congested area, several things could happen. The remote operator could take full control, or a crew could boat out and board.

The problem is that just as there are sound reasons to remove the crews, there are sound reasons to have armed crews onboard, as we've seen with the use of private security against Somali pirates.  As long as the ship can be controlled by having a harbor pilot come aboard, anyone could board the ship on their own and redirect it.  Fancy electronics?  Satellite links?  Intelligent control systems?   Can they take a full auto magazine from an AK and still function?  They can?  OK, what about a stick of dynamite or however much it takes to blow the control links into the sea?  The golden rule of "man makey, man breaky" applies.  Security can't be an afterthought, it needs to be designed in from the start.  I don't see a single word about that in the article.