According to a guest post on Watts Up With That, California's state assembly and senate have passed laws that require the state to reduce carbon emissions to 40% of the state's 1990 levels by the year 2030.  The new levels are 60% of the 2020 emissions levels, required by current CO2 reduction laws.  Yes, they are cascading reductions on top of other reductions which haven't been met, yet. 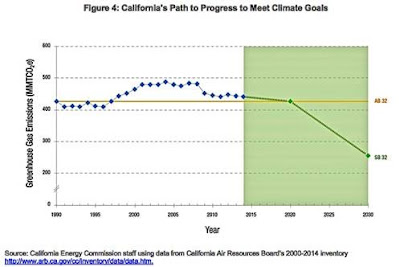 It doesn't matter that this is thoroughly impractical or that it will have virtually no impact on anything they think it will and is among the purest forms of Virtue Signaling you'll find.  If you're reading this from home in the Golden State, plan your escape before property values collapse.  Get Out Now.

WUWT author Larry Hamlin rightly says that if the state government is going to succeed, they're going to have to outlaw or strictly limit car usage - the largest source of CO2 emissions.  In fact, they'll have to go full tilt Agenda 21 or 2030 or whatever they're calling it today.  The state will have to control and dictate virtually every aspect of Californian’s lives including:
The last of industry ought to be looking at making their escapes very soon.  I know Texas has been actively recruiting the fleeing Californians and I believe our state has been as well.

The benefit of all this disruption in California, essentially either massively reducing the state's population or removing most cars, is going to be immeasurably small - if there's any benefit at all.  In global terms, California's total CO2 emissions are less than 0.4% of the global CO2 emissions EIA forecasts for year 2030 and the reductions are 60% of that.  The rest of the planet, especially the "developing world" is proceeding with building coal fired power plants just about as fast as they can be built.

In a piece I wrote in 2010, my first year here, I found a number for the amount of CO2 required to raise global temperature 1 degree C - according to the warmist's models. 1.8 million million metric tons.  California is going to reduce emissions by 172 million metric tons.  Since 172 is close to 180, lets be generous and round their reduction up to that.  That means they will reduce global temperature rise by 180/1,800,000 or .0001 degree C, which simply isn't detectable in a system as big as the planet.

It's a well-known truism that "gun control isn't about guns; it's about control".  The same goes here: "it's not about carbon dioxide control, it's about control".  Who's going to be left in California?  Limousine liberals, and rich Hollywood types.  Many environmentalists have said they'd like to see the number of humans reduced by 95%.  This way, they might get their wish in their state without actually having to kill anyone off.

Labels: commies and other idiots, enviro-nuts and flakes, politics