On June 1st of 1967, Sgt. Pepper's Lonely Hearts Club Band was released by the Beatles.  The most famous album of its time, perhaps ever, with cover art that itself has become famous. 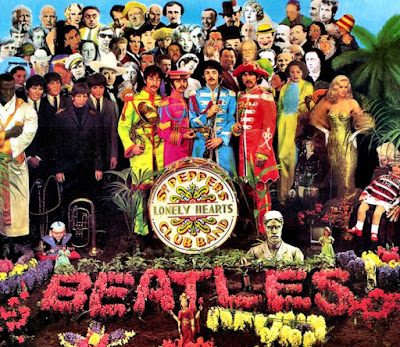 Whoever owns the Beatles music has decided to remix and reissue the album for the anniversary.  (I have no idea who really owns it - at one time it was Michael Jackson)


A new stereo mix of the album will be available as a single CD and as part of every other package. An expanded deluxe edition will be released digitally, as a two-CD set or two-LP vinyl package. A super deluxe six-disc box set will also be available.

The lead recording engineer on the project is Giles Martin, son of George Martin who did the original.  NPR music correspondent Bob Boilen put it this way:


He's just remixed the album, which may seem to be a project that falls somewhere between the questions 'why do that?' and 'how dare you?' But, as Giles will explain and demonstrate to us by comparing the hastily done stereo mix we have come to know, from 1967, and the mono mixes George Martin and The Beatles spent weeks on (which nearly no one seems to listens to), there was good reason to undertake this project.

As you might expect, glimpses of the final product have been leaking and are getting rave reviews.  Here, for example, is what's said to be the first take of "Lucy in the Sky With Diamonds".  For a 13 year old who had never heard anything like that, I was captivated by the ethereal opening keyboard line.  Most of us in the age group have heard the story that the lyrics were based on a picture John's son Julian had painted for a girl he knew named Lucy.  It came at the perfect time for John, who was growing beyond Barney-esque "I love you, you love me" lyrics and developing an appreciation for playing with words.  The turn was said to be at least partially inspired by Bob Dylan's lyrics and Lennon's own desire to be a sort of musical Lewis Carroll, with his love for Jabberwocky and Alice's Adventures In Wonderland.  Perhaps the crowning moment of this move was the song "I Am the Walrus".  The story there was that John received a letter from a child saying he had to analyze John's lyrics for class, so John decided to write the most confusing lyrics that he could.

Also being released as a part of the teaser is the "9th take" of the introduction to the album before the larger orchestra was mixed in.  At the end, Paul McCartney can be heard saying he thought they'd have it down after "one more day" of practicing that song.


"Originally, I was against remixing the Beatles," Martin told Mojo magazine in a new interview. "But there’s a technical answer, which is that the stereo mix was never theirs and the mono mix, which they did themselves and is superior, does sound ‘old’, like it was done 50 years go. But this is one of the most important albums of all time – I don’t want it to ever sound ‘old’. Nor do the Beatles."

In one sense, it feels strange to be able to remember this happening 50 years ago; in another sense it's a privilege too many people I've known don't have.  At 13, ending my 7th grade year, it was a year that would shape my life in several ways.  I was just learning to play guitar.  I was developing my hobby of taking apart electronics and trying to make things out of the parts.  A friend had a shortwave radio, and though I had heard shortwave before, I had never sat around and tuned the dial on one, trying to find out what I could hear.  In those days you could make a decent ham radio station taking apart a TV set, but I wouldn't get my ham license for another nine years.


"It was 20 years ago today
Sargent Pepper taught the band to play
They've going in and out of style
But they're guaranteed to raise a smile..."

Posted by SiGraybeard at 4:56 PM

Labels: lost and profound, Me, music