Is Hannity On the Way Out at Fox News?

Back on 4/20, when I wrote that Bill O'Reilly's firing didn't bode well for the future of alternative voices on the news, I passed on that Rupert Murdoch's son, James, was apparently going to scuttle the channel.  He "regarded many of the people at Fox News as thuggish Neanderthals and said he was embarrassed to be in the same company with them".


In the Hollywood Reporter piece, James Murdoch is not in the least bit trying to disguise or hide the message that he wants to kill Fox News as we know it.

Today, Bill Shine left the channel.  Shine was Rupert Murdoch's co-President and an executive with the network for 20 years.  According to the Washington Examiner (audio autostart warning)


Bill Shine, who has worked at Fox News for 20 years, has resigned as co-president.

An internal memo sent out by Rupert Murdoch, top executive of Fox's parent company, made the announcement on Monday.

"Sadly, Bill Shine resigned today," Murdoch's memo said. "I know Bill was respected and liked by everybody at Fox News. We will all miss him."

Twitchy reports that this was the result of Shine asking for a vote of confidence last week and not receiving it, based on a tweet last Thursday from someone named Gabriel Sherman. 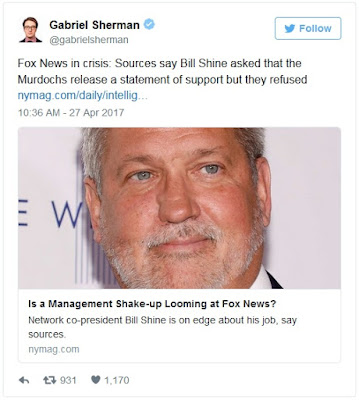 How this ties to the subject question is that Hannity has long considered Bill Shine an ally and a friend.  Shine is the one who recommended Fox hire Hannity, pairing him with Alan Colmes in what became one of their most popular early shows.   At 4:50 PM (ET), Hannity tweeted to Gabe Sherman


“Somebody HIGH UP AND INSIDE FNC is trying to get an innocent person fired. And Gabe I KNOW WHO it is. Best Sean.”

A bit after that (5:28), the Daily Beast was reporting Hannity was preparing to leave.


Shine was Hannity’s long-time ally whom he personally recommended the network hire two decades ago to produce Hannity & Colmes. In recent days, Hannity warned it would be the “total end” of Fox News should Shine leave, and he rallied conservative activists to back him up.

Initially, insiders said, Hannity’s army of lawyers had hoped to discuss with Fox ways of protecting his 8-year-old primetime show, amid fears that Lachlan and James Murdoch—fresh off the ousting of Bill O’Reilly—were looking to push the network away from hard-right politics.

It has been speculated that Hannity could be out as soon as he wants, with the claim that he has "key man" clause in his contract that he can invoke if someone he values in leadership is fired.  Projected dates have ranged from "by Friday" to leaving tonight.  Fox producers are saying to watch his show at 10 Eastern for a "very important" update. 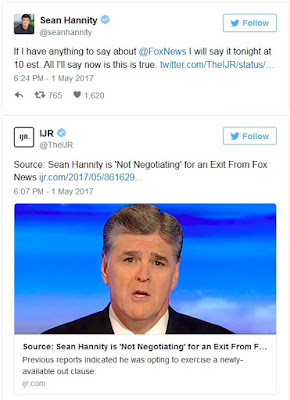 As you can see from his tweet at almost 6:30 this evening, Hannity is not saying he's out, but he's not not saying it.  All he's doing is confirming a story that he "is not negotiating" for an exit.  That step may not be necessary.

As I said about O'Reilly, I can't call myself a real fan of Hannity.  I've probably seen more minutes of Hannity's shows than O'Reilly's, but that's because of timing and the "rhythm of the day" around here. O'Reilly was on while I was tending to be here writing a blog post; Hannity was on when I was sitting around either practicing guitar or kicking back for the end of the day and vegging.  My knock on Hannity is that he's too repetitive; often using the same few phrases word-for-word like some sort of mantra for months on end.  The value of both shows was their ability to bring in very credible and often high-ranking guests for their views.

With what appears to be the coming death of Fox News, the chances of hearing genuinely alternative voices are going down.  I'm not sure when I first noticed that Fox was drifting away from being a good source, but it has been a while.  Judge Napolitano is a reliable alternative voice as a "contributor", as are Tucker Carlson and several minor voices around the network, but more and more the network is becoming a voice more like CNN/MSNBC/etc. than different.