The National Bureau of Economic Research issued a paper (behind a paywall) last month that the Washington Post reported on last week.  The message that American wages have been stagnating since the 80s or 90s is terribly optimistic.  The wage stagnation has been going on since about 1960.


The new paper includes some “astonishing numbers,” said Gary Burtless, an economist at the nonpartisan Brookings Institution who was not involved in the research. “The stagnation of living standards began so much earlier than people think,” he said.

The study examined career earnings for workers born in every year since 1932, and differentiated between men and women.  Those who didn’t work or only rarely worked were excluded, focusing instead on those who spent at least 15 years in the labor force.  Wage and salary data from the federal Social Security Administration was used to calculate the career earnings of the median worker born in each year.

One of the difficult traps in a study like this is normalizing the wages to constant dollars, which they state they've done, but about which the Post article says nothing.  The original is behind a paywall, so I can't tell from there either.  Chances are they used something based on official CPI numbers, which we know are not only manipulated wholesale, but the manipulation methods change over time.  This raises a flag with me, but I don't think it's fair to dismiss the study over just that.

The charts they produce are like this, showing the wage vs. time progression for various groups that started working in particular years.  Their incomes at ages 25 and 55 were compared.  In this plot, the fist cohort were 25 in 1960.  The cohort that was 25 in 1967 started out making almost 30% more and their earnings 30 years later were only about 8% higher.  You can see how the cohort that was 25 in 1980 started out at the same adjusted wages as those from 1967 and in 2010 they were making less than a worker from 1967 at the same age in that workers' life. 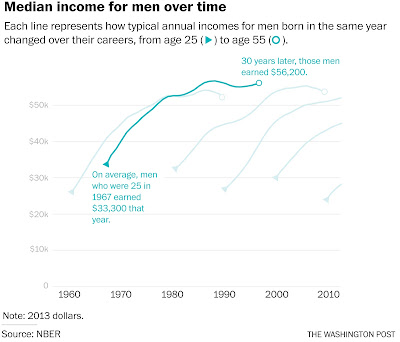 According to the paper's abstract:

The chart for women: 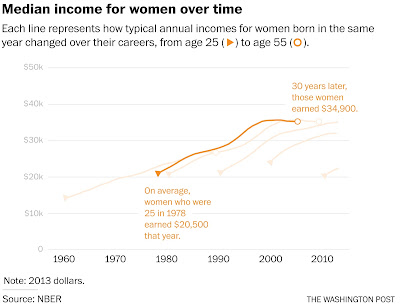 
The study, published Monday by the National Bureau of Economic Research, has not been peer reviewed, so other economists may yet challenge both specific results and the paper’s general conclusions. All the same, the research offers an answer to a couple of important questions that have been nettling economists.

In particular, the results show that more unequal incomes are not just a result of a widening gap between younger and older workers. Even among older workers, typical incomes have been falling while the wealthiest have been enjoying more and more of the economy’s gains. Poorer workers — who tend to be younger — will earn more as they get older, but they are not likely to earn enough to make up the difference.

The short version to me is first of all, "it's worse than we think", and that leads to the question of "why is this happening".  I've written on the topic of the decline in wages several times and have had a tendency to think it correlates with going off the gold standard to debt-based "phony money" in 1971, but the problem predates that by a decade.  Which is not to say going to debt-based money couldn't be a factor in the problem since the 70s, perhaps exacerbating the root problem.  Nothing says problems can't have more than one cause.  The researchers don't offer any mechanisms to explain, saying that perhaps they're looking in the wrong places and need new avenues of research.


In the past, a good guide to forecasting typical career earnings among Americans of a given age has been their average income they were 25.

The implication, Guvenen argues, is that economists should search for explanations for households’ current financial woes in the youth and childhood of today’s workers.

“We are maybe looking at the wrong place for the solution to stagnation in wages and rising inequalities,” Guvenen said. “To understand higher inequality, we should turn and take a closer look at youth.”

I'd like to see the same type of study done across other economies.  Most people will say it's because of off-shoring or outsourcing jobs or blame it on the Evil Rich People.  Bill Bonner had a good summary in a piece I quoted a year ago.


Most economists (and politicians) have blamed world trade for stagnant U.S. wages. The median wage in China is only $8 a day. No wonder U.S. factory hands can’t catch a break; who can compete with that?

But Germans compete with the Chinese, too. And their wages have gone up! In real terms, after adjusting for inflation, wages in France and Germany have been going up at a 0.7% rate for the past 15-20 years.

So why are wages in France and Germany going up while American wages are going down?