When I first started out on the G0704 conversion project, it was always in the long range plan to make the mill a large version of the Sherline/A2ZCNC hybrid I was coming from, and part of that was to add a rotary axis and make it a four axis CNC machine.  When I bought parts, I planned for the fourth axis: four of the big NEMA 23 571 in-oz motors, four stepper controllers, and so on.  I chose the rotary table that would be used early last fall and caught it on a Black Friday sale at Wholesale Tool.  Things like this don't go on sale very often, and I was glad to get it for 20% off (IIRC).

Today, I completed the modification to the rotary table and got it running.

Now considering I've had the table since around December 1st, you might want to ask why it took me so long to get it running.   Especially considering I finished the mill in early February, and have been tweaking and improving it ever since.  It's really a simple story.  The first time I tried to pull the crank handle to see what it takes to mount a motor, I couldn't get the handle off.  So I said, "some day when I have some time" and there it sat.  Well that reason and not having a pressing need for it.

The trick was to assume the handle could be persuaded to come off with a few light taps of a hammer on a screwdriver wedge, which it did.  The handle covered a pair of concentric cast iron disks, which is probably one casting finished differently on each layer.  It had three holes in it, although they weren't used.  I compared the pattern to one of the leftover "Phase 1" motor mounts I made over a year ago, and found that holes didn't line up, but that I could add new holes to my motor mount and drill and tap two new holes in this piece.  It looks something like this.  You can see the two new holes on the left and right of the centerline: 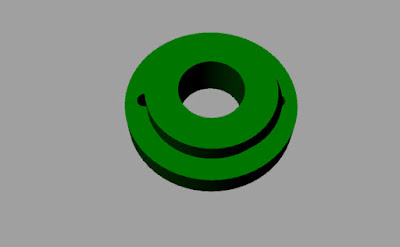 With the two new holes added to this, and the motor mount drilled to match, it was simple to put together.  I had some threaded standoffs leftover from Phase 1 as well; some that were too long some that were too short.  Clearly, I used the long ones, which were cut off and re-threaded. It went together with no issues whatsoever. 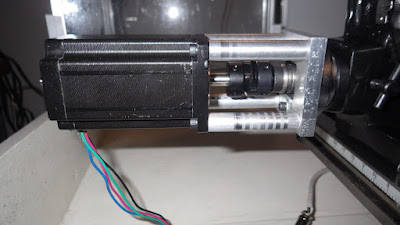 
Now that it's done, it's probably going to get put aside for a while.  There are no projects in the queue that require one.  A rotary axis is essential for some projects, simplifies some and has no use in others.

For those of you who are new to this subject, and wonder why someone would do this, here's a brief overview.  Rotary axes can be introduced parallel to the two main Cartesian axes.  The rotary axis parallel to X is generally called the A-axis and is most common.  One parallel to the Y axis is called B.  Aside from an A-axis, like mine is mounted, the most common "next step" is a full five axis CNC mill.  The guy whose plans I bought for my starting point, Hoss, has used this rotary table to make a "Fifth Axis" version of his mill.  He says he didn't use it enough to keep it and just left the rotary table in place.  The drawback to fifth axis mills, besides the cost of the machine, is the cost of the CAM software to take advantage of it.  That's the main reason I'm sticking with using it as an A-axis.