Every year as hurricane season progresses, many Floridians find ourselves spending spare moments at work and home looking at whatever happens to be brewing out there.  I pay attention to whether or not the storm passes through Hebert's box.  There are two different boxes, first noted by Paul Hebert (French - so it's pronounced AY-bear)


...who observed in the late 1970s that most strong hurricanes (characterized as those with winds exceeding 110 miles per hour (177 km/h)) which had struck South Florida since 1900 had also passed through one of these two small 335-mile-by-335-mile (517-km-by-517-km) square geographic regions. 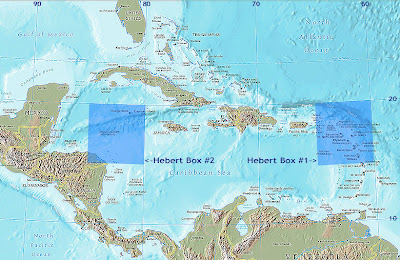 This is a correlation, not an absolute guarantee, but there's a good chance that any storm that hits here will go through one of those boxes.  The western box, near the Yucatan channel is less of a concern to me, because storms that go through that path tend to hit Florida's west coast, which weakens them and makes them less of a concern going overhead.

Don't look now, but Emily has traversed the eastern box, and the 5 day track has her possibly messing up our weekend.  The morning track was closer to land, and it seems that as the 5 days go by, these tracks always move to the right.  So we'll see...