We Hit the Debt Ceiling Again In 4 Weeks

I had the same reaction you just had: "What do you mean?  We just went through this!  Not again!!"

According to Tyler Durden at Zerohedge:


Two things happened when the Senate voted in the "Bipartisan" plan into law yesterday: i) deferred debt on the Treasury's balance sheet finally caught up with reality, and ii) as a result of i) America's Debt/GDP just hit a post World War 2 High of 97.2%.

Due to the accounting tricks TurboTax Timmy was playing (did you think being a tax cheat would help him in his job?), we had the largest one day increase in debt in our nation's history, $238.2 billion.  I happen to remember that the deficit for February was the largest single month deficit to that date, $225 billion, and larger than the deficit for all of 2007.  Which was then surpassed by March's debt increase, and so on.


Just as confusing is that according to the endnote in the debt subject to limit calculation, the new ceiling is not the $900 billion increase as requested, but only $400 billion more than the $14.294 billion previous, or at $14.694 billion. We hope this is some Treasury type or misunderstanding as this new ceiling will be breached in a month. (emphasis added) 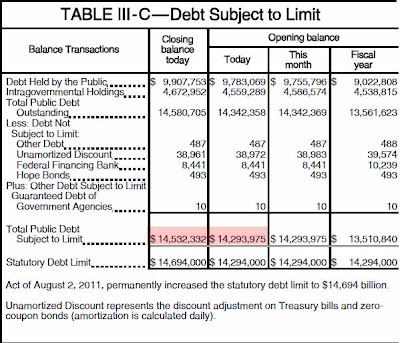 Look at it this way:  maybe this time they'll get it right.

Cartoon source... (but, seriously... does anyone really think I'm Bill Watterson, or that I'm trying to make a buck off selling Calvin and Hobbes as my work??)