Guess What? It's Probably the Sun After All

A few weeks ago, I was looking at Bad Astronomy, one of those blogs I occasionally visit.  Blog owner Phil Plait was blasting the idea of a solar cause for global warming and proved one of those axioms of science, that a scientist looking at a problem that's not in his area of expertise is no different than any other intelligent layman, except that he believes he's more qualified.  Plait commented on the idea that changes in solar irradiation can't account for warming but nobody is making that argument - certainly none of the solar physicists who study this link say that.  If you go to Bad Astronomy, read it for the astronomy; for anything else he talks about, frankly, you get better, more clear thinking from Borepatch, Kevin, or the other engineers' blogs that I visit (including this one, I hope!).

The mechanism that appears to give the best fit is solar activity; sunspot cycles.  The later half of the 20th century included unusually strong solar cycles, including the strongest cycle ever measured (peak in about 1957), and these strong cycles correlate with warming.  Similarly, the periods where sunspots vanish correlate with cooler periods: the Maunder minimum correlates with the little ice age, that we are still just coming out of.  So sunspots = warmer?  Aren't sunspots cool places on the sun that appear dark by contrast?

Yes sunspots are cooler, but the sunspots themselves are just symptoms of the real issue: solar activity.  Sunspots correlate with an active sun.  In the 1990s, Danish physicist Henrik Svensmark hypothesized that the active sun's expanded magnetic field and particle ejections would reduce the number of cosmic rays reaching the earth.  The cosmic rays, in turn, are one of the principal causes of cloud formation, so reducing cosmic rays reduces clouds which causes warming.  Svensmark proposed experiments that could be done with the European Union's particle accelerators, building a model atmosphere and measuring cloud formation.

Such a simple experiment that could break down the entire Catastrophic Global Warming position had to be opposed by the IPCC: the front organization for the warmist industry that stands to make trillions of dollars off global climate change hysteria, and oppose it they did.  Lawrence Solomon in the Financial Post puts it this way:


The hypothesis that cosmic rays and the sun hold the key to the global warming debate has been Enemy No. 1 to the global warming establishment ever since it was first proposed by two scientists from the Danish Space Research Institute, at a 1996 scientific conference in the U.K. Within one day, the chairman of the Intergovernmental Panel on Climate Change, Bert Bolin, denounced the theory, saying, “I find the move from this pair scientifically extremely naive and irresponsible.” He then set about discrediting the theory, any journalist that gave the theory credence, and most of all the Danes presenting the theory — they soon found themselves vilified, marginalized and starved of funding, despite their impeccable scientific credentials.

To the credit of their ability to block any real science from getting done, the IPCC was successful in keeping the experiment from being performed for over a decade. It was finally completed last year, the experiment confirmed Svensmark's hypothesis, and we can finally come close to saying "the science is settled" (in as much as it ever is - as Richard Feynman once said, “If you thought that science was certain - well, that is just an error on your part.”). James Delingpole covers the story in the Telegraph.


The research, published with little fanfare this week in the prestigious journal Nature, comes from über-prestigious CERN, the European Organization for Nuclear Research, one of the world’s largest centres for scientific research involving 60 countries and 8,000 scientists at more than 600 universities and national laboratories. CERN is the organization that invented the World Wide Web, that built the multi-billion dollar Large Hadron Collider, and that has now built a pristinely clean stainless steel chamber that precisely recreated the Earth’s atmosphere.

In this chamber, 63 CERN scientists from 17 European and American institutes have done what global warming doomsayers said could never be done — demonstrate that cosmic rays promote the formation of molecules that in Earth’s atmosphere can grow and seed clouds, the cloudier and thus cooler it will be. Because the sun’s magnetic field controls how many cosmic rays reach Earth’s atmosphere (the stronger the sun’s magnetic field, the more it shields Earth from incoming cosmic rays from space), the sun determines the temperature on Earth.

So why isn't this big news?  The CERN, under political pressure, is doing its ultimate best to squash the story!   Delingpole again:


So if it’s so great, why aren’t we hearing more about it? Well, possibly because the Director General of CERN Rolf-Dieter Heuer would prefer it that way. Here’s how he poured cold water on the results in an interview with Die Welt Online:


I have asked the colleagues to present the results clearly, but not to interpret them. That would go immediately into the highly political arena of the climate change debate. One has to make clear that cosmic radiation is only one of many parameters.

"Highly political" indeed, when the director of one of the world's top research facilities tries to hide the research his institute produces to appease the UN/IPCC.  Isn't it bizarre that the head of the CERN would try to muffle important research which should result in better funding for his institute?    Says a lot about how powerful the politics he's fighting against are, doesn't it?

So now there are at least three good quality, scientifically backed arguments against man-made climate change: 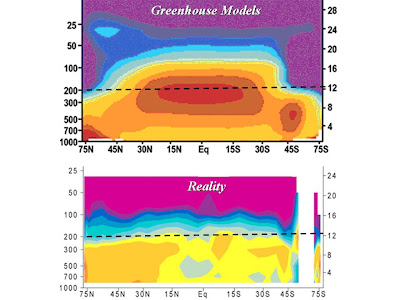 The climate sensitivity to CO2 as measured has the opposite sign of all of the models.  This plot is assembled from two in a paper by Richard Lindzen of MIT. 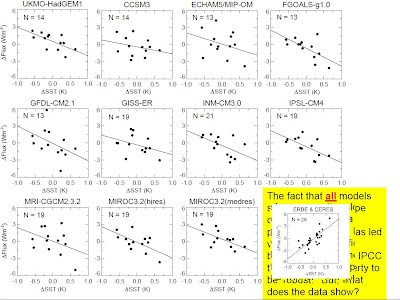 The plot shows how all models depend on a relationship of sea surface temperatures (SST) and heat flux in Watts per square meter.  The bottom right plot is the measured data from two satellite missions.  It has a completely different slope from all of models; as you can see, all the models have a (more or less shallow) negative slope, while measured data has a steeper positive slope.  That means the model results don't predict what will really happen.  In my world, that means worthless.

(The text in the yellow box that I clumsily covered reads: "The fact that all models show a negative slope corresponding to a positive feedback, has led virtually all scientific bodies including the IPCC to declare this property to be ‘robust.’ But, what does the data show?" and leads to the plot I inserted, from the next page in the presentation.)
Posted by SiGraybeard at 6:06 PM