A Heartwarming Story of a Stolen 1911

Somehow, my web surfing ended up here today, at the Southern Oregon Mail Tribune, with a heart warming story about a guy who bought a 1911 at auction, and doing some research, found it had been owned by a Medal of Honor winner.  He found it had been stolen from the MOH owner and he was in possession of stolen property.  He did the right thing and not only tracked down the owner, he returned it to the owner.

There's a law of the Universe that every religion talks about, and it's one of a tiny number (2?) of social laws that are as inescapable as gravity.  Eastern religions call it karma; Christians say "you reap as you sow".  Before that, Jews said, "Do unto others as you would have them do unto you"*.  As the gentlemen who returned the gun said,


"Concern yourself with what is right and you'll never second-guess that decision".

It's a great story.  Go read.  I should point out that the website apparently will use cookies to make sure you're not reading the old articles too many times in a month, so read it once and smile.  (I always heard that news in the morning was bird cage liner by that evening.  I guess they're holding onto everything they can.) 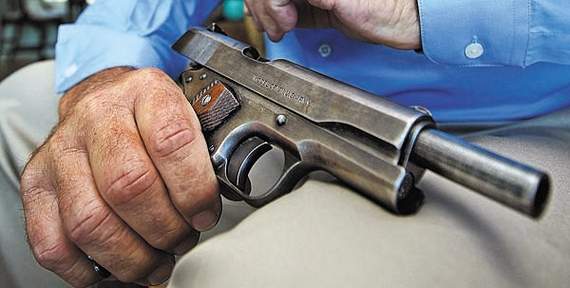 Photo from the paper (obviously)...