Let me tell you a little story, that you may have heard before.  Bear with me, I have a point.

As fall was approaching, a young bird decided he didn't want to fly south.  "That's what everyone does, but not me!  I'm a non-conformist!"

As October turned to November, our little bird friend was fine.  He was proud to still be in his meadow while all his wimpy friends left.  Then November turned to December and the snows came.  He was cold.  The fields (and the food) started to freeze over.  Finally, our little friend decided he needed to fly south.

Funny, that.  As he climbed a few hundred feet into the sky he got even colder.  He flew into a snow cloud and soon was getting coated with ice!  Eventually he fell to the ground.  Things looked bad for our little friend.  He was coated in ice, shivering in a cow pasture, and began to think he was going to die.

And then a miracle happened.  A cow came walking by, and by the greatest fortune, dropped a great steaming pile of shit on him.  Sure it smelled awful, but it was warm!  Wonderful warmth!  Our friend started to feel better.  He could move his wings!  He was so happy he began to sing ... and then a bobcat, following the singing, found him and ate him.

What does this have to do with anything?   This posting on Market Ticker.  Go watch, it's a 8 1/2 minutes long but must see. 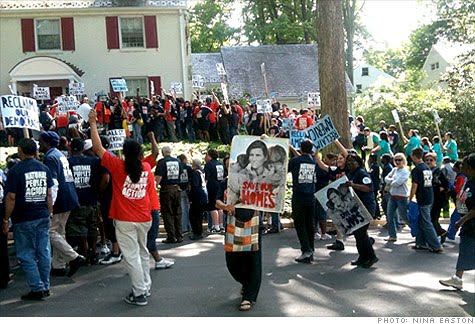 It smells of mob tactics, and to use the phrase Ann Coulter is using everywhere, it smells Demonic (and, no, I haven't read it).

Look, I'm not defending the bankers.  But they aren't the only ones responsible:  don't forget Fannie Mae, Freddie Mac, the incredibly stupid Jamie Gorelick, (you can almost hang the 9/11 attacks on her neck, alone) and the astonishingly corrupt Franklin Raines.  Don't forget the Community Reinvestment Act which first Jimmy Carter, then Bill Clinton used to force the banks into giving out bad loans, ACORN and other groups that would protest in the lobbies of the banks or at the homes of the bankers if that bank didn't give enough loans to people who couldn't afford to pay back the loans.  Don't forget ACORN founder Wade Rathke, his embezzling brother Dale and for God's sake don't overlook Dr. Evil - George Soros.  Throw in Barney Frank, Chris Dodd, and as many house and senate banking committee members as you want: it was there job to over see Fannie and Freddie - you can see how well they did.

There's a very well done piece on what caused the 2008 meltdown at Investopedia.  Their conclusion:  the Congress is largely to blame.

Your local banker has virtually nothing in common with the big banksters this video waxes poetic about killing.  The banker down the block is just a working Joe like all of us, trying to do what he thinks is a necessary job - and provide for his family.  Your local credit union banker is probably even a non-profit, "folks helping folks".  They're not the cow.

My version:  talking about "the bankers" is the same as talking about any group.  Groups aren't responsible: individuals are.  Those people need to be arrested, tried and otherwise dealt with.  It's a national shame they haven't been, but you just gotta know one reason is that they'd implicate congress.
Posted by SiGraybeard at 8:32 PM