So the market is all better, right?  Here's the DJIA chart from StockCharts.com 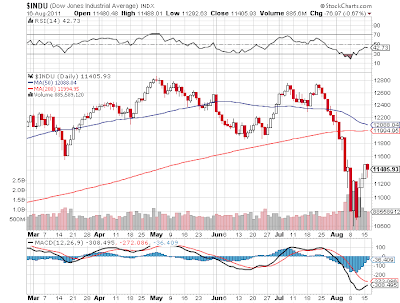 the average is up about 600 bucks since it's low last week, and it has apparently recovered from the shocks of last week.  Talking heads on Tout The Market TV are reminding you the time to buy is when there's blood in the streets.  Ready to dive back in?

Bill Bonner is one of the founders of Agora Financial, and co-host of the website "The Daily Reckoning".  Bill is one of the financial guys who gets it.  From a link on Lew Rockwell I got to Bill's 8/12 column, "Mr. Market's Next Attack".  You should read it if you're thinking of getting back in and following the early '00s advice of "just buy into an indexed fund and never look at it".  A few choice observations:


Mr. Market is a cagey fellow, no doubt about it.  And if he has a story to tell, he keeps it to himself.  That said, he’s only natural.  And there are certain natural laws that even he has to obey.

For example, he can’t allow debt to build up forever.   There always comes a moment of awful recognition, when lenders realize they’ve been idiots…when they see that they won’t get their money back.  Savvy speculators try to sell the debt short before lenders catch on.

All over the world stocks are down about 20% from their recent peaks and about 5% to 10% for the year.  But they’re far from cheap.  Shiller’s normalized earnings put the P/E on US stocks today at about 20.   Major bear market bottoms come with the P/E down at 6 to 8.   The typical bottom, according to Shiller, comes at about 13.

Bonner's article is a good read that goes from discussing how such a bear market would likely unfold to watching the UK riots and deciding that the zombie wars have already started.  Go read.   And speaking of zombie wars, Bonner's piece really fits in nicely with the article at Sword At The Ready, linked to by Borepatch and lots of others  Obama's Amerika: Inciting A Race and Class War to Achieve a Dictatorship.