Quite a day if you're nervously watching a retirement account - or if your day to day life depends on stock prices.  The big market was down over 500 bucks today, along with every asset class: stocks, oil, commodity metals like copper, aluminum, zinc and lead; gold, silver, platinum... everything.  Everything except the dollar index, which was up again as it has been for a few days now.

The dollar is up?  Why would anyone sell commodities and move into dollars?  The way I see it, there are only two reasons one would do that:  psychotic illness or a desperate need for dollars.  A need for dollars could come from having positions in the market that must be paid off in dollars.  Then it makes sense to sell other assets to get dollars to pay losses.

Industrial commodities like oil and copper being down, on the other hand, means the speculators believe the world economy is going down (or, at best, not going to be growing). All the stock markets are down because everyone is losing faith in ability of the central banks to stop the sovereign defaults that are looming.

So while it's tempting to blame this on the phony debt reduction turkey they just passed, it's more than that.  It's worldwide systemic collapse.

Is this "it"? As in the final slump?  Hard to say.  Things to watch for in the coming days are a failure of the Italian and other European banks.  Tyler Durden at Zerohedge posts:


Less than an hour ago, Larry Kudlow tweeted the following: "Sources tell me Italy has to restructure bonds.Deposit run on Italian banks.EU will have to mount Tarp rescue.Big stress on interbank loans." Basically, this is the worst possible combination for Europe which means that another bailout is not only imminent but has to happen tomorrow.

As I write this, it's just after 1 AM in London, a few hours earlier in eastern Europe.  Markets will be opening in another six or eight hours.  The Asian markets are opening now (Nikkei is down a few hundred Yen already).  By the time we wake up on the US East Coast, we may know the next attempt at a fix.

What can be done to stop it?  To actually stop it, in any sort of meaningful way... nothing I know of.  Oh, sure, they'll do a QE3 and dump tons of paper into the market, so that buyers will get their dollars or lira or drachmas, but that paper currency will be worth paper and ink.  There will be bailouts and transfers between the productive and unproductive classes; German workers will pay for Greeks who are 10 years younger than the workers and already retired.  Americans will provide bailout money to European banks, just like the trillions in 2008/09, and continue to provide cellphones to the poor and other handouts.  In the process, any money you have saved will become worth less and less until it's worthless.  Food and other real necessities will get very expensive, more companies will close, more jobs will be lost, European-style riots will spread over here.

Remember, Bernanke asserted once that he had the power to deposit funds directly into individual accounts.  Maybe they'll allow us to just draw extra zeros on our dollars with a Sharpie, so that ones become tens or hundreds.  It's exactly what they're doing.

John Maynard Keynes once famously said, "The long run is a misleading guide to current affairs. In the long run we are all dead", as a counter to the argument that his policies would lead to destruction in the long run.  A lot of Austrian economists are saying it may now be "the long run". 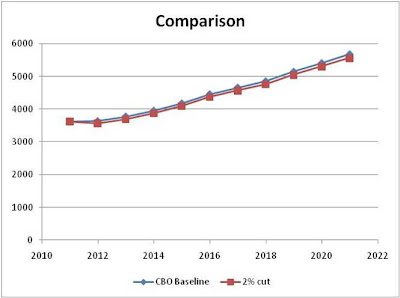 Comparison of the original baseline 2012 budget and the terrible, draconian, Tea party terrorist-demanded budget that will be killing people in the street.  If you can't cut more than this, you are doomed.
Posted by SiGraybeard at 9:42 PM