A week ago, the Telegraph (UK) ran a story called, "Market crash 'could hit within weeks', warn bankers" (H/T SurvivalBlog).


"The problem is a shortage of liquidity – that is what is causing the problems with the banks. It feels exactly as it felt in 2008," said one senior London-based bank executive.

"I think we are heading for a market shock in September or October that will match anything we have ever seen before," said a senior credit banker at a major European bank.

Taken by itself, this really doesn't say much, but let's add some additional data points.  A few weeks ago, I ran a quote from Bill Bonner, of Agora Financial, and linked to an article where he says, (as a tease - go RTWT)


We don’t know what game Mr. Market has in mind.  But we know he can play a cruel hand.  It’s not that he has no sense of pity.  He just wants to teach a lesson that investors won’t soon forget.  Here’s what we think he’s up to:

First, he will dally around a bit.  Let investors recover their breath and their nerve.  Then, he’ll move prices back up….this would draw more money into the stock market.

and paints a picture of a market moving up, enticing more buyers in, and eventually destroying them all.  Could the recent "winning streak" be a sign of this? 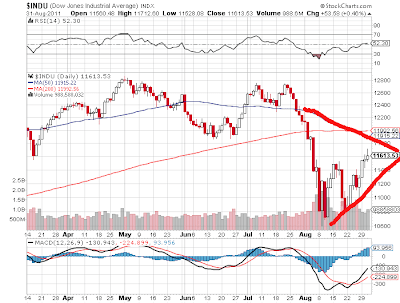 This is the DJIA, with lines painted on it that crudely match the slope of the 50 day moving average (top) and the resistance line (bottom) of the last few weeks.  Longtime readers here know that I refer to this "technical analysis" as drawing lines on charts and believing those lines mean something.  If these lines really do mean something and create a triangle or flag pattern, that says a breakout, either up or down, will happen before the point is reached.  By that scale, I'd say within two - three weeks.  Which happens to agree with the Telegraph article.  Considering the general world economic conditions, I'd expect a break down rather than up, but more technical data is needed to call the direction.

What about the traditional safe haven, gold?  Monday, Minyanville posted this really interesting chart showing the uncanny similarity between gold's price in 2006 and now. When scaled in price, not time, they lie on top of each other with very high correlation. 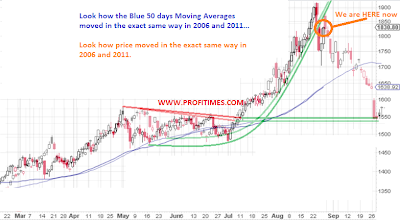 This implies that gold may be correcting, and getting ready to go on sale, with a bottom in the end of September, possibly down to $1500/oz, if it retraces the '06 lines precisely. The contrarian view is that the recent pullbacks have been due to trading margin requirements being raised, (silver had this done back when it was over $50/oz and has never gotten back) so that there is no correction going on and the overlay with 2006 is just coincidence.

You'll remember, I assume, that during the crash of '08, which was caused by a lack of liquidity (the same thing the Telegraph article says is going on now), that gold dropped by a large percentage, too, dropping around 30% (from over $1000/oz to just under $700).  The reason was simple: debts were owed and thugs were at the door demanding cash money.  Any asset that could be sold to raise money, even at a frightful loss, was sold to pay off the other debts.  If we face another nasty downturn in the stock market, the few who hold gold might well repeat the sell of 2008.

There are plenty of wildcards that can upset this.  QE3 is still being talked about and when you have influential loonies like Paul Krugman saying the administration should make up alien invasion stories to justify spending levels that would make TARP, QE1 and QE2 put together look small, you know the Keynesian "one size fits all" solution is what they're going for.  "QE3 will be launched by the year end, reason being that the U.S. is heading for a recession and a liberal monetary policy is one of the few policy measures remaining with the Federal Reserve." - Nouriel Roubini (h/t)  Some event could cause the rest of the world to lose faith in the dollar and cause a currency collapse.  There are too many possibilities to list.
Posted by SiGraybeard at 9:12 PM