Google is Not Just Going After 2A Sites

They're not just trying to shut down responsible pro-2A voices.  They're going after anything that has to do with liberty and freedom of choice.

A couple of weeks ago, I reported on a story that the single biggest correlation with living past 100, supercentenarianism, was living in a place that didn't have birth certificates and documentation of age.  Studies of these people found no correlations with the conventional wisdom we're all fed, such as following the Mediterranean Diet, consumption of red wine, legumes, or constant walking built into their lives.  The biggest correlation was pension fraud, not health effects.

This week, the story shifts to Google.  The story went by in the news that Google was going after "alternative health" sites and directing web searches away from them to the conventional medical sites.  This week we get some numbers posted by Robb Wolf on Instagram, via the same source as the previous story, Mark Sisson's weekly email. 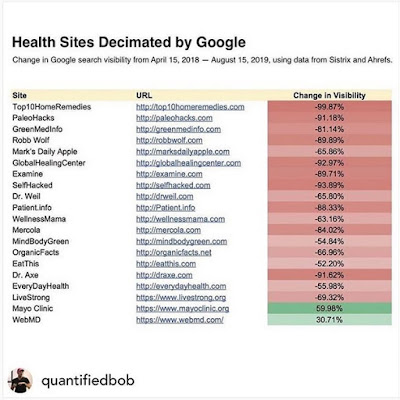 You will note that traffic to Robb Wolf's site is down 89.89%, while traffic to Mark Sisson's Mark's Daily Apple is down 65.86%, and the only two health sites with increases as presented here are WebMD and the Mayo Clinic - the conventional medical establishment personified.

Google is in that strange position of being such a strong brand that their name has become the alternate verb for "to search", so the way they're shunting traffic around these voices is going to drive some of these small businesses out of business.  I know a few of these sites, though not all, but that's not the point.  Why does Google get to decide who stays in business and who doesn't?


Some of this is due to Google weighting their algorithms toward "expert" advice, toward opinions and articles written by people with MDs and PhDs after their names. I've tried to overcome this by changing the way I cite research. I've always cited and linked to tons of medical studies, far more than the "experts" like Mayo Clinic and WebMD ever have, but now I'm actually listing a "References" section with those proper citations in the proper academic format. You've probably noticed. It's helped a bit, but the drop-off has been larger than this can account for.

In my opinion, this development just means that people like me and Robb are over the target. We're a threat, and institutions are worried. We've already had a huge effect on the way people eat, live and exercise. Grandmas are going keto. Grandpas are doing CrossFit. Your kid's school teacher is IFing. Large multinational food corporations are buying boutique avocado oil-based mayo brands for large sums of money. It's an interesting time. Conventional institutions are feeling the heat, and this might be one way to try to stem the tide.

You see it in the big, concerted, coordinated effort to push fake meat substitutes, switch the entire world over to a diet consisting of half a burger a week, and promote silly conspiracies like keto crotch—often all involving the same players.

I'm not saying it's nefarious, but it's very curious.

If there's a nefarious aspect, it's that across everything we see about them, Google seems to be behaving in such a way that cries out for regulators to crack down on them.  This is something that big companies like because they have the resources to meet the expenses that the laws cause, while smaller competitors are less able to.  It's sometimes referred to as the successful "closing the door behind themselves."

Let's put it this way: consider a small startup that has come up with some sort of search algorithms that can threaten Google.  Do you think Google would return the potential Google-killer in searches?