Quote of the Day - Florida and California

From the Foundation for Economic Education (FEE), in an article on California's new rent control law.


When you see a headline that begins with “Florida man…,” you know it’s more likely to be about some guy trying to take down a tornado with his Colt Python than it is that a resident of the Sunshine State has cracked cold fusion. In public policy circles, the words “California policymakers…” appearing in a headline are attaining a similar status.

First off, I'm impressed that not only does author know what a Colt Python is but that he expects all his readers to, as well.  Second off, equating “California policymakers” with “Florida man” is just wonderful, given the general perception of Florida man.

The article itself is OK, I guess, but it's a subject that hardly needs to be covered.  Only the most stupid of the stupid think it's a good idea.  For one thing, in contrast to the saying, “if you lined up all the economists in the world, they still wouldn't reach a conclusion,” isn't true in this case.  Even the famously always-wrong Paul Krugman acknowledges it's a bad idea.


The analysis of rent control is among the best-understood issues in all of economics, and — among economists, anyway — one of the least controversial. In 1992 a poll of the American Economic Association found 93 percent of its members agreeing that ''a ceiling on rents reduces the quality and quantity of housing.''

The argument that comes to my mind first, even before that fact, is the one I wrote about just back in mid-June.  Even the North Vietnamese communists saw that rent control was stupid.  In the person of Foreign Minister Nguyen Co Thach, quoted here:


Addressing a crowded news conference in the Indian capital, Mr. Thach admitted that controls … had artificially encouraged demand and discouraged supply…. House rents had … been kept low … so all the houses in Hanoi had fallen into disrepair, said Mr. Thach.

“The Americans couldn’t destroy Hanoi, but we have destroyed our city by very low rents. We realized it was stupid and that we must change policy,” he said. [Emphasis added - SiG]

It turns out that actual communists are smarter about their failures than the American "wannabe communists" in California, New York, or the rest of the Democrat party. 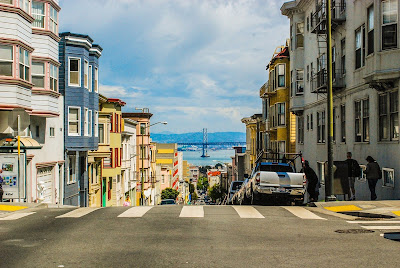 Old San Francisco stock photo.  You can tell it's old because there's no shit visible in the street.