Depending on which source you go to, 50 years ago this weekend (within plus or minus about five days) The Beatles last studio album, Abbey Road, was released.  The band would break up in 1970, and while another album (“Let it Be”) would be released, that would be based on some tapes that the band had recorded before Abbey Road.  The studio session for John Lennon’s “I Want You (She’s So Heavy)” was the last time that all four members were in the studio together.

Need I say it was one of my favorite albums?

The album was released to mixed reviews (isn't that always the case), but it was big seller.


The Guardian found the record “a slight matter”, although Rolling Stone remarked that it showed that the band was “still unsurpassed”. Commercially, there was no question. It entered the UK charts at number one, where it spent a total of 17 weeks, with similar performance internationally.
...
Their recording swansong followed fragmentary, disparate work on 1968’s White Album and the fractious Get Back sessions in the early months of 1969. That was an attempt to rekindle their early, live energy first in Twickenham film studios and latterly their Apple building on Saville Row although it collapsed into discord, leaving hours of tape that would eventually surface as the 1970 album Let It Be, with Phil Spector tasked with finishing the job.

Work on Abbey Road in summer 1969 wasn’t free of discord but, unlike the preceding Twickenham sessions, it didn’t result in sloppy and incomplete recordings. This was due in no small part to the reinstatement of George Martin as producer and the band’s return to EMI studios. Martin instilled a sense of discipline. His involvement came with the condition that the band “let me produce it the way we used to”.

The band, unable to face returning to the Get Back tapes – “none of us would go near them”, remarked Lennon – concurred. As Harrison would recall: “We decided, ‘Let’s make a good album again’.”

It’s plausible that, sensing the end was near, they wanted to go out on a high. The extent to which Abbey Road was planned as a finale is debatable. As with much of the Beatles’ final days, matters are shrouded in contradiction. The mix of schoolboy friendships, working relationships, a strained legal partnership and creative inspiration meant that the months of recording were unlikely to be either unremitting contention or unbroken harmony. It’s also almost impossible to discount hindsight and the tendency to read their final moments as a band into the music – “The End” ’s elegiac conclusion to the medley on side two in particular.

As I got older, I came to think of that “side two” as one continuous song, rather than the nine separate titles listed on the jacket and prefer to listen to it that way.  Some of the reissues of the album appear to treat it that way.

The iconic cover photo of the group outside the studio has been copied and parodied an incredible number of times. 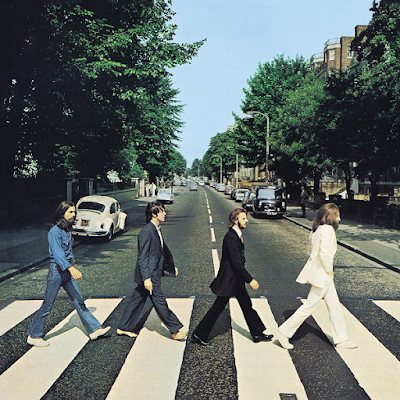 I actually have this one as a framed 8x10 on the wall, not the real one. 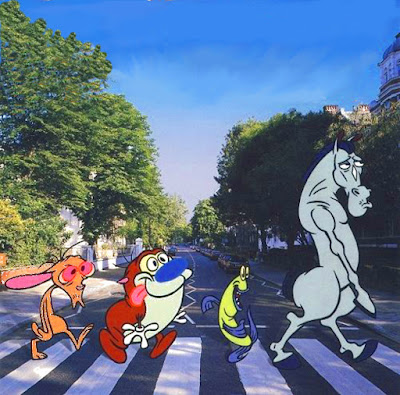 Naturally, there are 50th Anniversary Special Editions out at your favorite streaming service or however you buy music these days.  I haven't bought any of them and probably won't.  I have the CD version of the album that was remastered in the 90s (I think!) and having a new group of producers recreate the music is like asking someone to recreate the Mona Lisa or Michelangelo's Pieta.  They're more likely to screw the pooch than produce a masterpiece from the old tapes.